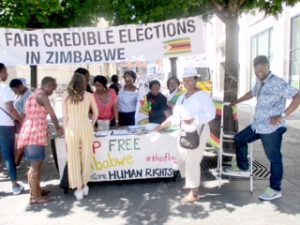 The British campaigning organisation Action for Southern Africa (ACTSA) has expressed fears that the outcome of the July elections are a foregone conclusion. ACTSA, formerly the Anti-Apartheid Movement, speaks of suspicion that what it calls the Zanu PF / military alliance will not allow Emmerson Mnangagwa to lose his first election.

ACTSA says that, although ZEC is allowing parties to observe the printing of ballot papers, it will still not permit independent verification of their distribution. It goes on: ‘For at least a year ACTSA’s partners have said that Zanu PF activists in rural areas have been intimidating people, telling citizens that their vote will not be secret. Moreover, since the announcement of the elections, the government has reportedly deployed around 5000 (plain- clothed) soldiers in rural areas, and some traditional leaders aligned with Zanu PF have allegedly called on people to vote Zanu PF or face the threat of eviction from their homes.’ (See: https://actsa.org/wp-content/uploads/2018/06/ACTSA-Key-Issues-Regarding-Zimbabwean-General-Election-2018.pdf.)

Reports indicate that, despite the continuing big budget deficit shown by the latest economic figures and illustrated by the long queues at the banks, Zanu PF has still managed to find plenty of money to finance its election campaign, providing vehicles and campaign material to its supporters. This comes despite reports of deception by some Zanu PF ministers who are said to have wasted $300,000 hiring a cargo plane from the dodgy Zimbabwe Airways to ferry campaign material from China, ony to have it refused landing rights because of registration and regulatory issues (see: https://www.theindependent.co.zw/2018/06/22/ministers-in-trouble-over-zanu-pf-funds/).