World Cup 2018: A ‘respite from hardship’ for Zimbabwe 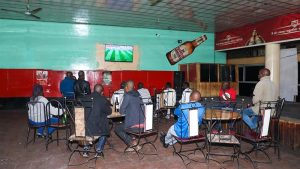 Although Zimbabwe was banned from the qualifying round, people there are still obsessed about the World Cup.

Harare, Zimbabwe – A lights-flashing and siren-sounding police escort led a convoy of vehicles through the streets of downtown Harare.

Onlookers stood by the roadside, curious to know who was driven past.

Only Zimbabwe’s president was known to travel by a motorcade. But this fleet was shorter, the vehicles not so top-of-the-range, plus there was a bus full of tourists.

It only heightened the curiosity.

As the convoy, on its way to the National Sports Stadium, passed by a jam-packed sports bar perched on top of an unplastered two-storey building, it drew only a few glimpses through the windows.

At that time, the World Cup game between Portugal and Morocco had the full attention of the football fans inside.

Some of them were sitting on the floor due to a shortage of space.

“It’s ED. I wonder where he’s going this time,” said one fan inside the bar, incorrectly guessing the motorcade was carrying President Emmerson Mnangagwa.

The footballers were in Zimbabwe for an exhibition match against retired local players in a government-driven initiative to market the country as a safe and attractive tourismdestination.

Mnangagwa visited the match during the second half which was interrupted for his arrival. The footballers were in the country for two days and were also taken to tourist attractions.

The government, through the Zimbabwe Tourism Authority, paid them $2.3m for the trip.

That is an enormous sum for a wobbly economy like Zimbabwe’s, and has, unsurprisingly, courted controversy in a country with more pressing priorities than a costly exhibition football match comprising former greats.

Zimbabwe is currently grappling with a cash shortage. The sight of people sleeping outside banks to withdraw as little as $20 was common in recent months.

It didn’t help the organisers that while the match was on, sports bars and betting shops throughout Harare were filled with fans watching the World Cup, unaware and uninterested in events taking place at the National Sports Stadium.

He added that the tour was ill-timed and a waste of money.

“Everyone in Zimbabwe is watching the World Cup. How do you have that kind of counter-attraction? It was bound to flop. Whoever was involved in organising that nonsensical game was motivated by corruption and malice.”

But according to the country’s tourism and hospitality industry minister, Prisca Mupfumira, Zimbabwe can reap benefits in the future by splashing a huge amount to host retired footballers.

“These are big names. Just look at the number of people that follow them on social media. It’s like we are planting. It involves nurturing and watering. And we are already seeing the results of our efforts through the increased tourist arrivals in the past few months.

“They are going to encourage others to come to Zimbabwe. The more tourists we receive, the more investment opportunities will be created for the country.”

Those who support @LFC this guy here scored a good 4 to the good against your team during a night when @Arsenal had a sizzling performance. He was indeed a Beast on the field, a Legend pic.twitter.com/FGA57nqOmA

how was the crowd at the rally?

Football matches, whether exhibitions or tourism matches, are not punctuated by overt political sights and sounds. For football fans, it was not the best legends match, but for Harare south constituents, it was a music treat and a chance to het extra party regalia

Mupfumira added that Zimbabwe will partner a top European team, similar to Rwanda, which has partnered with the English football club Arsenal.

“The money is excessive, too. Two million dollars. It would’ve been OK if that amount was paid to Barcelona or Real Madrid but not these football tourists and former players who are past their sell-by date.”

Zimbabwe’s football federation declined to comment on the events, saying it was not involved in the event.

On the streets and in homes across Zimbabwe, however, the World Cup taking place in Russia is a bigger subject of discussion.

For Tapiwanashe Mutandiro, a 37-year-old store owner in Harare, the match at the National Sports Stadium is of no interest to him. He took time off work to watch Portugal versus Morocco.

“Kluivert is one of my favourite players of all time, maybe I would have gone if there wasn’t the World Cup,” said Mutandiro.

“I’d rather watch Cristiano Ronaldo on TV now than go watch Kluivert in flesh. Those guys who have come here are no longer appealing. They belong in the past.”

Football is the most popular sport in Zimbabwe even though the country has never qualified for a World Cup. The closest it came was to the 1994 tournament, when it was one win away from qualifying.

This time, fans were upbeat about the Warriors’ chances of making their debut appearance on international football’s biggest stage.

But the country will never know if its heroes really had the pedigree to go all the way to Russia. In March 2015, FIFA expelled Zimbabwe from the qualifying rounds as a sanction for a “non-payment of outstanding debt” to former national team coach Valinhos, a Brazilian who left the job in 2008.

It sparked off angry reactions across the football-mad nation. Later that year, it led to the dismissal of Zimbabwe Football Association President Cuthbert Dube.

But the major setback has done little to dampen the mood and football craze in the country; enjoying the World Cup which serves as a perfect escape from Zimbabwe’s daily challenges.

Bars are popular places to watch the World Cup. The venues are filled to capacity and owners charge entry fees.

“I’ve just moved out of my family home to live alone, so I don’t have a TV,” said Sean Murwira, a young accountant. “Also, it’s more fun to watch it here in the bar.”

It’s the winter season in Zimbabwe and owners are benefitting from increased visitors.

“Sales have gone up sharply regardless of the chilly weather,” said James Sakarombe, a sports bar manager. “I foresee volumes going up even more as we get to the latter stages of the World Cup. It has also helped that we have installed charcoal heaters inside the bar.”

The fans will need to wait another few years to see if they can cheer their national team at Qatar 2022 from these bars. But for now, they are ready to enjoy and back those who are in Russia.