A frenzy of feasting and opulence while Zimbabwe starves

Source: A frenzy of feasting and opulence while Zimbabwe starves – The Zimbabwean 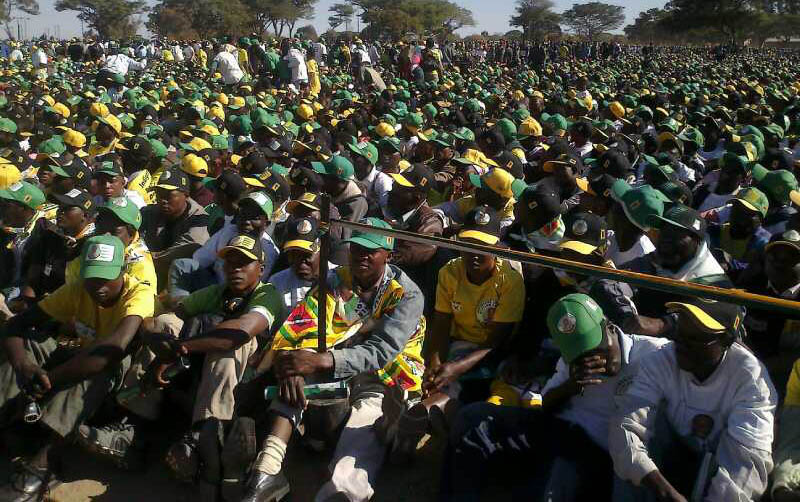 As I write this letter from Zimbabwe today deep purple rain clouds hang over my home town, there is neither electricity nor water but there is what the media are calling ‘feasting  in a  time of famine’ going on not very far away. Seven thousand Zanu PF delegates, VIPs and the country’s top leadership are at their annual conference being held in Goromonzi.  Reports of 150 cows to be slaughtered, five tons of chicken and eight tons of maize meal, not to mention bread, rice, fresh produce and more. Ninety buses are providing transport, four boreholes have been drilled for water, a transformer installed for electricity with a standby generator and a car park for thousands of cars has been constructed.  Apparently women selling wild fruit on the roadside and little boys watched wide-eyed yesterday as luxury vehicles swung into the venue car park, including a black Lexus sports car.

This frenzy of feasting and opulence is happening at a time when the UN says eight million people in Zimbabwe need international food aid to save them from starvation. This is more than half of our total population. The contrast with the feasting for the few and the reality for the rest of us is this: a standard monthly income of approx Z$400; one single chicken (1kg) in the supermarket today is Z$90; a ten kg bag of maize meal is Z$119; a loaf of bread is Z$18.50; one litre of milk is Z$25; one single mango is Z$20; we have water once a week if we are lucky; we only ever have electricity in the middle of the night  between 10pm and 4.30am; the queues for fuel are of many hundreds of cars every day and they are always invaded by men in Zanu PF cars and government vehicles. And in the hospitals, oh God help us is all I can cry out in despair; the few doctors left in government hospitals say they are praying for their patients as they have nothing  to help them with: no equipment, no medicine, no supplies. How many people are suffering and dying at home is a number we do not know, a face we cannot bear to see.

For a few days I’ve been asking people if they had one wish for Zimbabwe this Christmas what it would be. It wasn’t a political question but most of the responses were and it caused many eyes to glisten with tears as they spoke, so distraught are we all, at the shameful, desperate state of our country.

Here are some of our Christmas wishes for Zimbabwe in 2019:
Rain, rain and more rain.
An unselfish government.
Corrupt free government.
A government that is honest, has integrity and a conscience.
A government that is clean, efficient and honorable.
A government that thinks of the citizens and not themselves.
A government who realizes they are only caretakers of the country and responsible for the well being of its people.
A neutral transitional authority leading to free and fair elections.
No more indirect genocide.
No more police beating peaceful protestors.
No more soldiers shooting unarmed citizens.
An outbreak of compassion for the people from the political elite.
And the one wish that I heard so many times, and which I echo: A government that has a heart for its people; a heart filled with empathy and unselfishness.

This Christmas with a government that simply does not and will not see the desperate anguish of the people, the best thing any of us can do is to not to be overwhelmed but to just try and help one person at a time. This week I’ve met many who are doing exactly that and it makes me humbled and tearful, proud to be a Zimbabwean.

This will be my last Letter from Zimbabwe in 2019. Thank you for reading these letters and my books about life in Zimbabwe. Thank you for your messages, emails and contributions which keep hope alive as we strive towards a compassionate, loving, humble Zimbabwe. Until next time, Happy Christmas and New Year, love cathy 13 December 2019 Copyright © Cathy Buckle. http://cathybuckle.co.zw/
For information on my books about Zimbabwe and my Beautiful Zimbabwe Calendar for 2020 go to www.lulu.com/spotlight/CathyBuckle2018 . For archives of Letters From Zimbabwe, to subscribe/unsubscribe or to contact me please visit my website http://cathybuckle.co.zw/