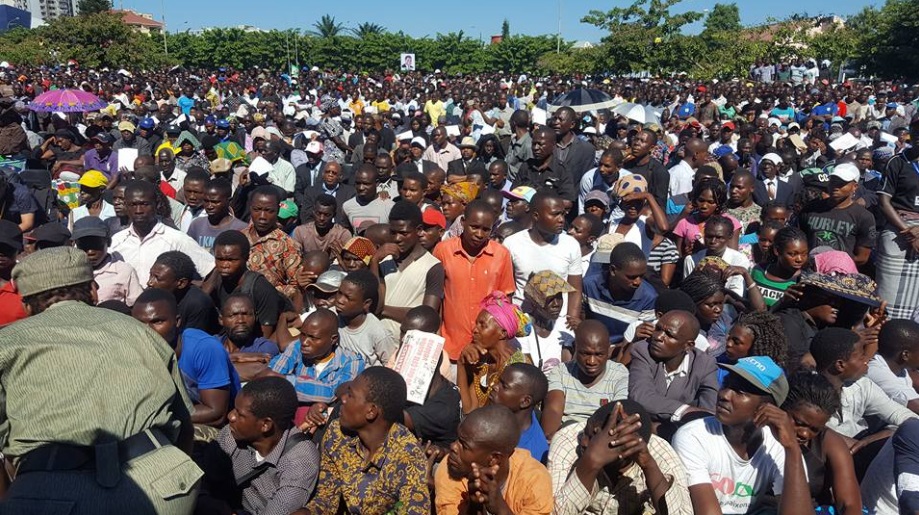 The coffin of Afonso Dhlakama, president of the Mozambican National Resistance (Renamo), arrived this morning in Railway Station Square in Beira, where it will remain for the duration of the funeral ceremonies.

The hearse entered a specially prepared enclosure at 8:53 a.m., when the space was still only partially filled and as people were still making their way to the venue on foot. In the photo below, we can see what witnesses describe as thousands of people filling the Square.

A funeral procession escorted by the Mozambique Police travelled around the city from the chapel of Beira Central Hospital to the place where the opposition leader’s body now lies guarded by four members of the Defence Forces of Mozambique (FADM).

During the morning ceremony, organized jointly by the Mozambican government, the Dhlakama family and Renamo, public figures, politicians, members of the diplomatic corps and other personalities will present condolences to the family.

The funeral eulogy, scheduled for 11:00 a.m., will be delivered by President Filipe Nyusi, with whom Afonso Dhlakama at end of 2016 agreed a end to hostilities in the centre of the country between the armed wing of Renamo and the Mozambican armed forces.

The two started direct talks which took the head of state more than once to the Renamo president’s hideout in the Gorongosa mountains, and which, according to the pair, were well on their way to reaching a new peace agreement.

Filipe Nyusi’s contribution to today’s ceremonies will be the last of a string of condolences presented to the family, Renamo and others.

Afonso Dhlakama will be buried on Thursday in his hometown of Mangunde, about 300 kilometres southwest of Beira.

The Mozambican government announced on Friday that the Renamo president would receive an official funeral considering his status as leader of the opposition.