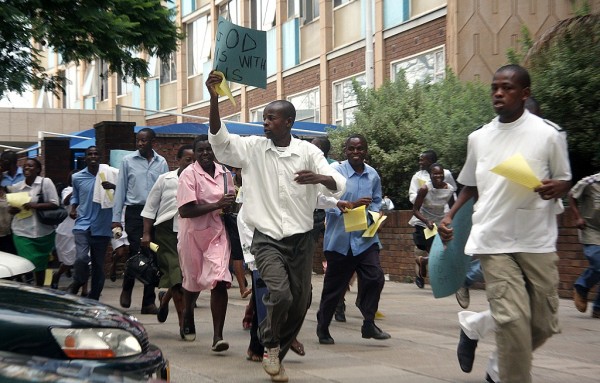 File: Zimbabwe will raise public-sector pay by 10 percent starting in July after hundreds of nurses and doctors embarked on a nationwide strike demanding better working conditions. Photo: DESMOND KWANDE / AFP
HARARE – Zimbabwe will raise public-sector pay by 10 percent starting in July, a move likely to widen the budget deficit as President Emmerson Mnangagwa tries to curb strikes by public workers before elections expected later this year.Mnangagwa, facing his first presidential vote set for July, last week promised better conditions for government workers as he delivered his ruling Zanu PF party’s election manifesto.The 75-year-old Mnangagwa is under pressure to revive Zimbabwe’s economy. The country suffers from a shortage of dollars that have curbed imports, a dilapidated infrastructure and an unemployment rate estimated to be as high as 80 percent.

Apex Council, the top body that represents all government workers, said on Tuesday the government offered to increase salaries and allowances for all its workers.

The offer followed strikes by doctors and nurses in March and April, the first such action since Mnangagwa took over from 94-year-old Robert Mugabe, who resigned after a de facto army coup in November. Mnangagwa has yet to set a date for elections.

Teachers had threatened not to go to work on Tuesday when schools re-opened for a new term, but the Zimbabwe Teachers’ Association (ZIMTA) said it wanted to give talks a chance.

The proposed increase is still far lower than workers’ demands – they wanted 100 percent increase in pay – but it is still likely to widen the 2018 budget deficit, which was forecast at $672-million (R8.4-billion), or 4.5 percent of the gross domestic product. The deficit reached $1.8-billion last year.

“As Apex Council, we said the government should go back and increase the offer while we carry out the exercise of also consulting our members,” Alexander said, adding that she hoped negotiations could resume next week.

ZIMTA Chief Executive Sifiso Ndlovu said union leaders would meet later on Tuesday to discuss the government offer. He said most teachers in Harare’s schools had reported for duty.