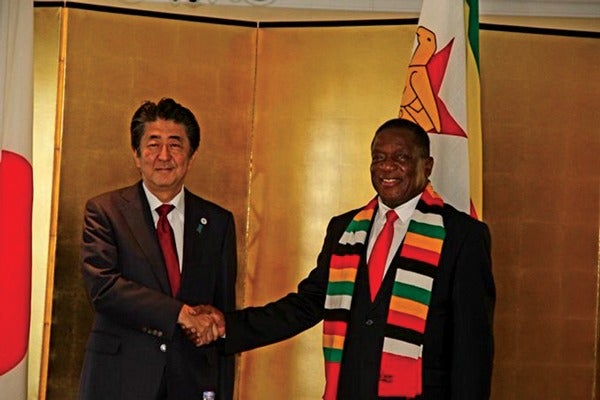 newZWire
While the Japanese are often not as forthright as Americans, it says, one thing they value is time. This was a factor that the more than 30 African leaders that attended the International Conference on African Development (TICAD) held in Yokohama, Japan, had to deal with.

Between August 29 to 30, Japanese Prime Minister Shinzo Abe held a series of meetings with a procession of African leaders, among them President Emmerson Mnangagwa.

Each of the leaders had as little as ten minutes with Abe, leader of the world’s third largest economy. At $5 trillion, the Japanese economy is more than double the size of the economy of all of Africa, which had a combined GDP of $2,24 trillion in 2017, according to the African Development Bank.

Japanese companies are still reluctant to invest in Africa; the Japan Business Federation (Keidanren) says in a report that its members are still wary over Africa’s corruption, inefficient legal systems and “stagnant improvement in security conditions”.

Yet, Japan is spending $20 billion in Africa, targeting work in infrastructure, technology and food security. And so it was that African leaders, many of them leading resource-rich countries, lined up at Abe’s door, each waiting for a few minutes’ worth of grovelling. As is tradition in such engagements, all the meetings were brief, meaning African delegations had very little time to make an impression before being shunted out for the next lot – a kind of diplomatic speed-dating.

Japan used to have over 30 companies in Zimbabwe, but is now down to just two brands, Toyota and Astra. The only major infrastructure projects currently funded by Japan is a stretch of the Makuti Highway, plus the Nyakomba Irrigation Scheme in Nyanga.

For Mnangagwa, the meeting took just 15 minutes, according to the Japanese Foreign Affairs ministry. Says the Ministry’s note: “At the outset, Prime Minister Abe mentioned the importance of institutional reforms for promoting business, as discussed at the TICAD7 and stated that: “We hope that reform will be promoted and democratisation will be advanced in Zimbabwe under the leadership of President Emmerson Mnangagwa.” Mnangagwa stated: ”I appreciate for the invitation to the TICAD. The TICAD process initiated by Japan is the first common platform to discuss African development, and expressed that he would like to strengthen the bilateral relations, including business.”

Abe then expressed condolences over Cyclone Idai, pledging his assistance on reconstruction and public healthcare.

Japan will also send an agriculture expert to Zimbabwe, but also expects improved business conditions in the country.

Says the Japanese government: “In addition, Prime Minister Abe announced Japan’s intention to support the improvement of hospital facilities and food security, notified that Japan will dispatch an experienced agricultural expert to Zimbabwe, and requested an improvement of the business environment for the promotion of trade and investments between Japan and Zimbabwe.”

The hospital facility project referred to, according to the Zimbabwe government officials, is plans by Japan to rebuild the paediatric ward at Harare Hospital.”

How did Zimbabwe’s peers fare?

Edward Lungu got 20 minutes in a meeting in which Abe started by wishing Zambia’s athletes well at the Tokyo 2020 Olympics. The two then discussed an “agreement to further develop economic relations” and Japan’s plans to send an expert to Lusaka to help Lungu with “securing debt sustainability”.

Paul Kagame of Rwanda got 10 minutes, discussing trade and Rwanda’s first-ever satellite, developed by the two countries “scheduled in the near future”.

Cyril Ramaphosa stayed a bit longer, taking 25 minutes of Abe’s time, where Abe said of the South African President: “We have great hopes in your leadership.”

The two exchanged some banter over the Rugby World Cup beginning in September in Japan. Said Abe: “I wondered why the Japanese team had chosen a strong South African team as an opponent, but I wish both teams best of luck; and finish the game safe and sound.”

Abe and Ramaphosa then discussed trade and investment relations, including upcoming meetings on opening up the Indian Ocean for more trade, and establishment of the Japan-South Africa Business Council and Japan’s support for a universal health insurance system. There was also 25 minutes for Uhuru Kenyatta of Kenya, home to the largest number of participants in Abe’s ABE Initiative, a training programme for young entrepreneurs. Nigeria’s Muhammadu Buhari got 15 minutes, getting praise from Abe for his efforts in taking Nigeria to “the next level”. He discussed a Japan-Nigeria Business Facilitation Council support for the Centre for Strategic Research and Studies of the National War College “for the improvement of security situation” and to provide support for the improvement of countermeasures for infectious diseases.

Namibia’s Hage G Geingob met Abe for 10 minutes. Abe said: “We are interested in the potential of Namibia with its rich resources and look forward to promoting business relations.”

Ghana’s Nana Addo Dankwa Akufo-Addo had a 20 -minute meeting, discussing the opening of a JETRO office in Accra and a joint business council. The Democratic Republic of Congo’s Félix Tshisekedi got 15 minutes, and was congratulated for his election victory. Abe pledged US$5 million in support for the fight against Ebola and further support to provide food aid.

George Weah, the Liberian president, held a 15-minute meeting, in which it was noted: “President Weah, touching on the fact that he was elected President at the age of 52, the same age as when Prime Minister Abe assumed his post, expressed his hope for closer relations between Japan and Liberia.”

Abe’s meeting with Angola’s João Lourenço was longer than most, at 30 minutes. Said Abe: “I expect further progress on reform under the administration of President Lourenço.”

Ethiopia’s Abiy Ahmed held a 15-minute meeting, where the focus was on “peace and stability in the region”. Abe would also support reforms in Ethiopia, including funding the upcoming election through the UNDP, and also support infrastructure, healthcare and agriculture. Abiy’s Twitter feed ran a thread on the meeting. With all the African leaders, Abe discussed the “North Korean situation”, according to Japan’s Foreign Affairs briefs.