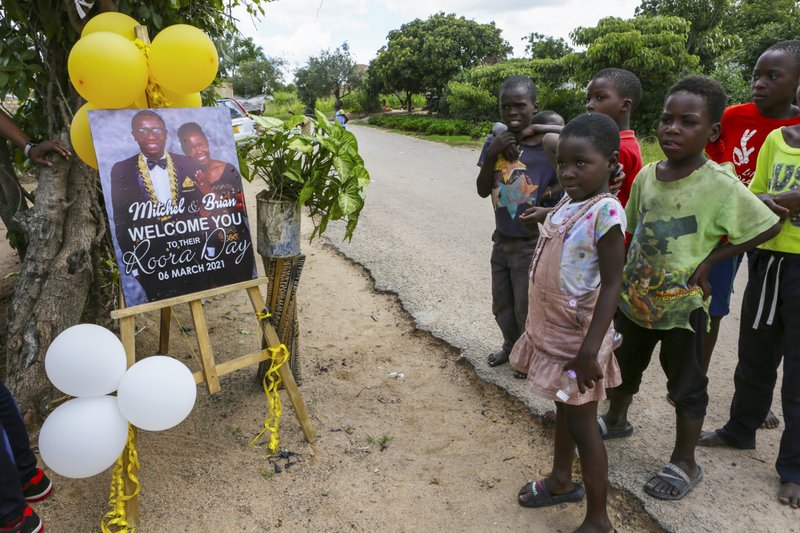 Children follow the proceedings at a traditional marriage ceremony in the capital Harare, Zimbabwe Saturday, March 6, 2021. Many people across Africa are rethinking big, bountiful weddings amid the economic ravages of COVID-19 and the coronavirus pandemic is forcing change in communities where family can mean a whole clan and weddings are seen as key in cementing relations between communities. (AP Photo/Tsvangirayi Mukwazhi)

KAMPALA, Uganda (AP) — The moment of truth for Ivan Arinaitwe came when he had to choose among many relatives and friends whom to invite to his wedding. An initial 150 people swelled to 300 as he agonized. No matter how he tried, it would be hard to achieve Uganda’s recommended “scientific” wedding, slimmed down for the COVID-19 pandemic.

In Africa, where weddings often go big, he would invite 1,300 people if he could. Now he worries about how the uninvited might react and the consequences for his family.

“It’s a bit complicated, very complicated actually,” said the employee of a government research agency whose wedding is scheduled for April. “But we have a scapegoat of the COVID-19 pandemic. I will say, ‘It’s not me. It’s what the government has said. If I didn’t invite you, please understand.’”

He is not alone. Many Africans are rethinking big, bountiful weddings amid efforts to discourage big gatherings to combat the spread of COVID-19 and in response to the economic ravages of the pandemic. In Uganda, an East African country of 45 million where colorful wedding convoys are a street spectacle on weekends, President Yoweri Museveni last year ordered so-called scientific weddings, attended by no more than 10 people, to stem the spread of the coronavirus.

Museveni put on such a wedding for a cousin in July in the lush gardens of the official residence, State House, with the masked couple in socially distanced seats. Even the simple bridal cake looked dismal, unlike the giant tiered cakes that often dominate receptions.

The pandemic is forcing change in communities where family can mean a whole clan and weddings are seen as key in cementing relations between communities. Extended families often plan weddings, and large, extravagant ones are a status symbol in places like Nigeria, where over $2 million can be spent.

Many in Uganda have expressed skepticism about small weddings, and there were reports of police interrupting noncompliant ceremonies before the rules were gradually eased to allow up to 200 attendees.

But now, as the pandemic continues to bite, more people are cautious with their money.

“When the coronavirus struck, people adjusted quickly, very quickly,” said the Rev. Sammy Wainaina, provost of All Saints Cathedral in the Kenyan capital, Nairobi. “For weddings, people have gone small.”

More Kenyans now opt for laid-back “garden” events as well as the civil unions that became popular in the past year, he said. While that may be a good thing, Wainaina said, he’s concerned that some “can become very casual with such weddings and only realize later that they were not committed to the vows they made.”

The demand for church weddings “has gone down considerably,” he said.

A similar trend is reported in Uganda by Charles Nsimbi, an official in charge of registering civil unions, who told the New Vision newspaper that the average number of unions per day has risen to 12 from five before the pandemic.

Arinaitwe, the Ugandan planning a small church wedding, said he decided not to have the reception in his rural district, where even the uninvited can show up. The invitations specify two people, and no children. He knows that will leave many upset, yet it’s necessary to keep numbers in check and avoid starting his marriage with a hefty bill to pay.

“Given that the disposable incomes of people have drastically reduced, people are in survival mode,” said Moses Mugarura, a Ugandan pastor who owns a restaurant in the capital, Kampala, that was once in high demand by couples.

His restaurant hosted no wedding meeting from February 2020 through January, he said. And he went from attending a wedding every other weekend to only four last year, citing families worried that their eligible daughters “are not exposed to the normal opportunities.”

“I believe that many people have lost faith and have gotten to the low-hanging fruit,” he said, referring to cohabitation.

But simply living together is not a solution for some in conservative societies including Noel Mporebuce in the Rwandan capital, Kigali. When the central African nation reported its first virus cases, he was preparing for a wedding initially scheduled for Boxing Day. The lockdown imposed to slow the pandemic effectively banned social gatherings and left him with fading hopes of a classic wedding.

“By now we would be happily married, living as husband and wife,” he said. “Everything is now left in the hands of God. Coronavirus is busy killing our future.”

Another Kigali resident, teacher Emmanuel Gatera, described a different problem for a sister whose wedding had been scheduled for Christmastime but is indefinitely postponed as her partner struggles to make ends meet. The pregnant woman moved in with him anyway because she feared he would change his mind about getting married.

“Cohabitation is unthinkable in our society, and that scar will live with (my sister) forever,” Gatera said.

And yet for others the pandemic has presented an opportunity to circumvent wedding ceremonies that normally cannot be bypassed.

Philemon Jambaya, a freelance journalist in Zimbabwe, said he negotiated down the bride price via WhatsApp, then had a small and brief traditional wedding recorded on smartphones. Family elders didn’t resist, he said.

His success is noteworthy in the southern African country where a traditional marriage can be elaborate, involving up to a dozen steps that take months leading to a crowded betrothal and meal.

“I never imagined marrying that way, but I couldn’t wait,” Jambaya said. “Everyone knew how much I loved her and how desperate I was to make her my wife, and that we are also living in abnormal times.”