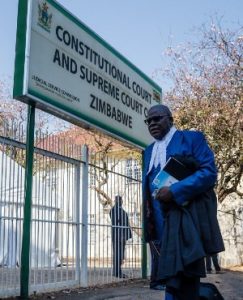 Today, August 24, 2018, Zimbabwe’s Constitutional Court dismissed an application in which the MDC Alliance in terms of Section 93 (1) of the Constitution sought nullification of the July 30 election results whose outcome was in favour of Zanu PF’s Emmerson Mnangagwa.

As Crisis in Zimbabwe Coalition (CiZC) we have maintained that the process through which Mnangagwa was ‘elected’ was flout with electoral irregularities and that the July 30 elections failed the credibility test. If anything the shambolic July 30 elections perpetuated the legitimacy crisis.

We have in the past expressed reservations with the country’s electoral processes and there are a number of irregularities that we pointed out and these undoubtedly point to the fact that the July 30 elections were a sham and were reminiscent of past disputed elections which were characterized by vote rigging, coercion, mutilation and murder of civilians, persecution of opposition and civil society leaders and activists among other irregularities that go against the principles of free, fair and credible polls.

Prior to the ConCourt ruling, we expressed our fears which mainly stemmed from the fact that the independence of the judiciary is largely compromised following the Mnangagwa-sponsored amendment of the constitution in 2017 – Section 180 relating to the Judiciary Appointment Procedures. A closer look at the court proceedings on Wednesday and the resultant verdict is a clear testimony that the judiciary in Zimbabwe is captured, the Judges questioned and crushed all opposition submissions and no queries were raised to either ZANU PF or ZEC despite the fact that the submissions by the latter were questionable and did not respond directly to the issues raised by the opposition.

Given the omni-present Party-State conflation, Zanu PF has maintained a stranglehold on the judiciary and is seemingly commandeering all state and independent institutions.

And the army stands ready to defend Mnangagwa’s stay in power despite the sham July 30 election.

While the ConCourt ruling is final, it has to be noted that it does not in any way resolve the legitimacy and constitutional crisis in Zimbabwe. It is unfortunate that despite evidence of vote rigging, the apex court used its own yardstick to measure the credibility of the July 30 polls.

We maintain that the incoming President is a beneficiary of a military coup which was followed by a sham poll and the ConCourt ruling has heightened citizens’ mistrust in the judicial system and other key government institutions.

One of our fears ahead of the ConCourt ruling was the apparently unholy alliance between Zanu PF, the Zimbabwe Electoral Commission and the judiciary especially after the militarization of key state institutions following the November 2017 military coup which resulted in the ascendancy of Mnangagwa to power.

After the November 2017 military coup, we remained firm as CiZC that Zimbabwe’s return to norm compliance is benchmarked on the holding of credible, free and fair elections. The 30 July ‘election’ has no capacity to solve the state legitimacy question and return to constitutional order. We are also concerned that the constitutional crisis is set to escalate after the ConCourt ruling.

Zimbabwe’s crisis has been worsened by the fact that Zanu PF has captured state institutions that should support democracy and stands ready to use whatever means necessary to retain power and this includes terror, murder, arbitrary arrests as well as isolating the nation from the international community (as evidenced by recent statements by war veterans loyal to Mnangagwa and government ministers).

This will certainly come with negative consequences on the country’s re-engagement process with the international community and ultimately, Zimbabwe’s economy will continue on a downward trend under a Zanu PF government suffering from a legitimacy crisis.

We remain worried that the Mnangagwa regime has already severed relations with strategic partners in the global community solidifying our fears that the next 5 years will witness uncontrolled economic meltdown and incessant closure of democratic space and a defiance of the global human rights order.

We are however concerned that Zanu PF politicians seem determined to proceed on that rough patch as to them, political office is an opportunity to create a ruling elite that is deeply embedded in anti-developmental corruption (enclave economy) while the ordinary citizen suffers.

CiZC will continue to provide thought leadership as well as canvassing for support from regional, continental and international partners in resolving the Zimbabwean crisis.

We are already escalating our calls and appealing to citizens and heads of states in the SADC region for the re-establishment of the SADC Tribunal as an independent avenue for justice for citizens in closed and troubled democracies such as Zimbabwe.