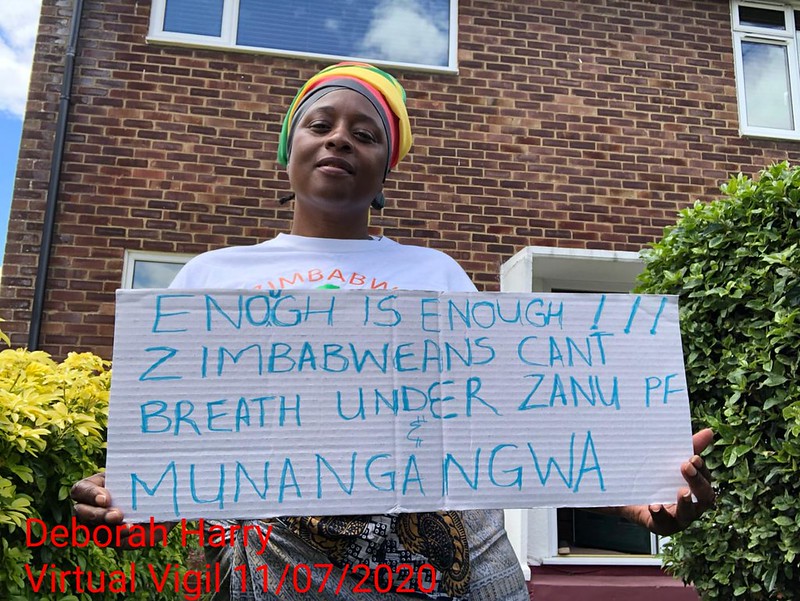 The arrest of prominent journalist Hopewell Chin’ono and the political leader Jacob Ngarivhume has received wide international coverage, exposing the desperation of the Mnangagwa regime as Zimbabwe faces collapse.

They were taken into custody on Monday but only appeared in court on Friday, when they were accused of incitement to public violence for supporting proposed demonstrations against corruption and poverty planned for 31 July. Both men were denied bail pending trial next month.

Observers noted the irony that most violence at opposition protests has been meted out by the police or army not the demonstrators.

Human rights lawyer Doug Coltart, who is representing Chin’ono, said: ‘We disagree with the magistrate’s ruling and his findings. He did not engage in particular with the evidence laid before him by the investigating officer who admitted there was nothing in the tweets that formed the basis of the charge to incite violence. We will be appealing against the ruling.’ (See: https://www.theguardian.com/world/2020/jul/24/zimbabwean-journalist-calls-for-fight-against-corruption-to-continue.)

Before being taken back to prison Chin’ono, who had written articles exposing corruption, said: ‘Basically, this means journalism has been criminalised. The struggle against corruption should continue. People should not stop, they should carry on.’

Amnesty International agreed, saying the arrests were ‘designed to intimidate and send a chilling message to journalists, whistleblowers and activists who draw attention to matters of public interest in Zimbabwe’.

Following the arrest of the two men, a number of other human rights activists have gone into hiding, including Job Sikhala, Deputy National Chair of the MDC Alliance. He said his family were under 24-hour surveillance by security agents (see: https://www.thezimbabwemail.com/main/zimbabwe-protest-organisers-goes-into-hiding/).

Despite everything, the government maintains that the economy will soon improve. However, according to Fitch’s economic research agency, Zimbabwe is the riskiest country in the southern African region (see: https://bulawayo24.com/index-id-news-sc-national-byo-189322.html).