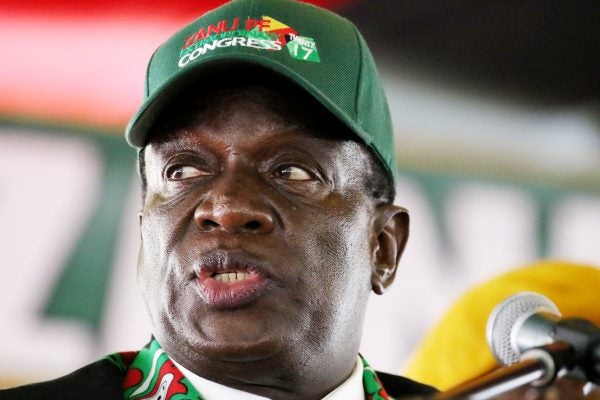 President Emmerson Mnangagwa has been told by his allies that he has no choice but to implement reforms and end human rights violations in order to win over western countries that are increasingly tightening the noose on his government.

According to reports produced by the Political Actors Dialogue (Polad), a grouping of opposition parties seen as sympathetic to Mnangagwa, diplomats in meetings with the outfit have been emphatic that they are not impressed with the government’s pace of reforms.

The committee said it met the British ambassador Melanie Robinson on January 24 and her United States counterpart Brian Nichols as well as European Union ambassador Timo Olkkonen on dates that were not mentioned in the report.

The three diplomats and other agencies met by the Polad committee were not flattering in their assessments of the government’s track record, the report says.

“Your Excellency, one of our findings was that there appears to be general consensus that as a country we must commit to the speedy and sincere implementation of electoral, political, security and economic reforms as a pre-condition for them to consider reviewing the restrictive measures,” reads the report obtained by this publication.

“Their strong argument and conviction is that the process of implementing these reforms seems to be progressing at a snail’s pace,” the report added.

Ncube was blacklisted over accusations that he ordered the abduction and torture of government critics, the US Treasury Department said.

The US said Sanyatwe was being punished for directing soldiers that shot to death six protesters during the August 1, 2018 demonstrations over delays in the release of presidential election results.

Mnangagwa’s government has hired western public relations firms to lobby for improved relations with the west.

Zimbabwe has also won the backing of the Southern African Development Community and the African Union to lobby against the sanctions.

Meanwhile, Britain’s Defence minister Earl Howe told the House of Lords last week that London would not soften it stance against Mnangagwa’s government until its implements genuine political and economic reforms.

“My Lords, I acknowledge the noble Lord’s long-standing and close interest in Zimbabwe and its people, and I agree that we must continue to give hope and encouragement to all those who want to see genuine political and economic change in Zimbabwe,” Howe said in response to a question from Lord Oates, a Liberal Democrat, on whether Britain would take the EU’s lead in reviewing sanctions against Zimbabwe.

“However, we have to face the reality that no package of external support will deliver for the Zimbabwean people without fundamental reforms, as he rightly says.

“Therefore, the onus must remain on the government of that country to demonstrate true commitment to change.

“So far, we have seen limited progress.”

Howe hinted that Britain, which pulled out of the EU this year, might tighten its sanctions on Zimbabwe if there are no reforms by the end of the year.

“We are not wholly in agreement with the EU on its approach to sanctions,” he said.

“During the EU’s annual review of its Zimbabwe sanctions regime, for example, it decided to suspend sanctions on Grace Mugabe.

“As I said, the UK remains aligned to the EU’s restrictive measures on Zimbabwe during the transition period.

“We did not agree with its decision to suspend sanctions on Grace Mugabe; we will review the whole sanctions regime at the end of the year, as I have mentioned.

“It is important to stress that our commitment to the people of Zimbabwe did not stem from being an EU member.

“We have long-standing, deep relations with that country, as noble Lords will know.

“We will continue to raise our concerns with a range of international partners and most recently did so at the UK-Africa Investment Summit.”

“We are seriously concerned about human rights in Zimbabwe,” he said.

“There are abductions, arrests and assaults on civil society and opposition activists.

“The country remains one of the UK’s 30 human rights-priority countries.

“We provide extensive financial and technical assistance to civil society organisations in their efforts to hold the state to account on issues related to human rights.”

He said the UK would, however, continue supporting Zimbabwe through United Nations agencies.

“We are disappointed that the staff-monitored programme agreed with the IMF has gone off-track.

“Our focus at the moment is on mitigating the worst impacts of the economic crisis and concentrating on the most vulnerable Zimbabweans.”

Nick Mangwana, the government spokesperson, said Zimbabwe was not seeking a rescue package from Britain, but wanted the sanctions against the country removed.

“We have not asked for a rescue package consideration from the British government and we are not in the process of developing such a consideration,” he said.

“We have only asked for a fair chance to develop our country by having the impediments placed against us to be an unhindered member of the community of nations removed.

“So we are not clear on how people turn down something, which is unsolicited for.”

Mnangagwa has so far refused to hold talks with MDC leader Nelson Chamisa to discuss political reforms because his rival does not recognise his controversial victory in the 2018 elections.