AMHVoices: Kudos to Minister Shiri and his team 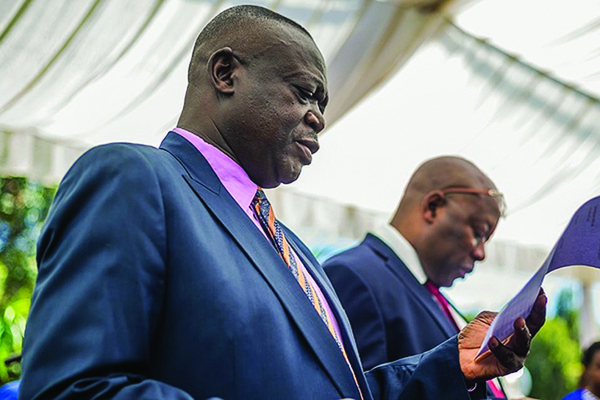 IT pains a lot when a person knows swimming is the only way to survive drowning or being carried away by a flooded river, but denied by a stagnant log that pins one of his legs against the surface. That person dies a painful death and will be buried a sad one.

By Isaac Mupinyuri, Our Reader

I offer my apologies if I have started it wrongly, but that is my thinking about what is happening in the agricultural sector, especially the command agriculture programme, where Agriculture minister Perrance Shiri is doing a wonderful job coming up with all excellent initiatives to make sure Zimbabwe returns to its regional foodbasket status.

Shiri is such an outright minister doing everything that he is supposed to do, but I am afraid all his energy is not getting the support it deserves.

I am now a fan of agricultural programmes on ZTV and, especially AgriBusiness, where the last one was about mainly wheat production. He was just down to earth with his expectation, and was spelling out what he wants agriculture to be in Zimbabwe.

Shiri urged wheat farmers to produce for the country, saying inputs were available for that. He went on to touch on a lot of programmes like Pfumvudza for the small-scale farmers, agricultural equipment for mechanising farming production. All to me made sense.

Shiri, like Mines minister Winston Chitando, heads one of the most important ministries which needs hands-on planning and execution, not the just talking and promising approach.

This is a ministry that depends largely on the rainy season, plus as for our country, minimum irrigation as our agriculture lacks irrigation equipment. To that effect, this ministry must be prioritised in terms of budgetary pressures.

Since our economy is a hand to mouth one, I suggest this ministry be given first preference so that inputs are availed to farmers so they can start preparing for the next season.

Government must learn from the tobacco sector, which produces a lot of the golden leaf for the world. It is because tobacco contractors start giving inputs in June or July, creating a lot of time for the farmer to prepare for a good season.

We cannot pretend to be caught unawares every season because of arrogance or laxity. At least we must show that we are learning lessons from failures so that we correct for a better future.

Agriculture is seasonal and in our case, the Finance ministry must allocate enough resources to the Agriculture ministry in time so that the intended purpose is achieved.

Shiri knows what Zimbabwe must do to reclaim its lost breadbasket status.

By not quickly giving enough support on time for the agricultural sector, government wastes millions of dollars if the inputs come late.

This year’s rainy season, government must allocate Shiri resources that equal his planning and expectations.

The government must allow the agricultural sector the swimming power so it does not drown.

A better Zimbabwe is planned now so that we avoid bad seasons like this year, which saw other areas being affected by late supply of inputs.