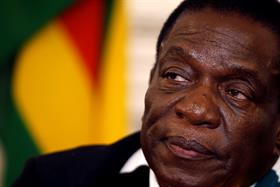 The South African government and the ANC are singing from different hymn books when it comes to the current crisis in Zimbabwe, whose citizens have taken to the streets over the past few weeks in protest against massive fuel price hikes recently imposed by the government.

While South Africa has condemned the human rights abuses meted out on Zimbabwean protesters by security forces, the ruling Zanu-PF party has blamed the protests on “regime change agents”.

A high-level ANC delegation – including secretary-general Ace Magashule and Bongani Bongo, a member of the ANC’s subcommittee on international relations – met with Zanu-PF officials, including President Emmerson Mnangagwa, in Harare this week.

This, after at least a dozen protesters died and scores were arrested as police fired live ammunition and tear gas during clashes over the rising cost of living and the fuel price increase.

“We condemn violence wherever it takes place,” Bongo told City Press this week.

“But the briefing we got was that the violence was informed by some elements of regime change. The people who were injured were not taken to Zimbabwean hospitals, but to centres designed by people unknown to the government of Zimbabwe or Zanu-PF.”

Bongo said the ANC was now characterising the violent protests as an element of regime change. “We think that if there are such things happening, government must take control. There are elements that seek to undermine the authority and sovereignty of the government of Zimbabwe.”

This directly contradicts International Relations Minister Lindiwe Sisulu, who has criticised the Zimbabwean government for its “heavy-handed” approach in cracking down on protesters.

“We have expressed our concerns about the levels of violence and how [the police] deal with any challenges on the streets,” Sisulu said last week.

“During our press briefings, every time we have talked about Zimbabwe, we have mentioned the fact that we are unhappy. It only brings negativity to a country that needs a lot of support. They have acknowledged that they have been heavy-handed.”

Bongo said the ANC would lobby other liberation movements on the continent to demand the removal of US-led Western sanctions imposed on Zimbabwe.

“We will continue to support Zanu-PF and the government of Zimbabwe. The problems of Zimbabwe will be resolved by the Zimbabweans themselves. We will rally other liberation movements to make sure that we convince both the African Union and the Southern African Development Community to approach the West to lift the sanctions. Zimbabwe is currently unable to trade properly as a result.”

The US and EU imposed sanctions against Zimbabwe in 2000, during former president Robert Mugabe’s rule, accusing him of rigging elections and violating human rights.

The ANC is considering unveiling a package to assist Zimbabwe to get back on its feet. As part of the package, the party will advocate heavily for the lifting of sanctions and will work to mobilise other liberation movements to support Zimbabwe’s development.

“There is a plan to assist Zimbabwe, and not only financially,” said Bongo.

“There must be a package. We have already requested government to meet with the Treasury of Zimbabwe to share ideas about how to structure a package. We are aware of meetings being scheduled between the SA Reserve Bank and Zimbabwe’s Reserve Bank.”

Bongo said the ANC wanted a lasting solution in Zimbabwe to avoid the influx of refugees to South Africa, not a quick fix.

“We need to come up with a strategic plan because whenever anything affects Zimbabwe, it affects the ANC and South Africa directly and indirectly. Whenever there are problems, the majority of Zimbabweans come to our country. As you know, we share a border,” he said.

It is estimated that more than a million Zimbabweans live in South Africa – hence the need to involve them in the resolution of the conflict, concluded Bongo.