How not to win hearts and minds

Source: How not to win hearts and minds – The Zimbabwean

In a country that is used to turmoil, the month of January will go down as a period when we literally shot ourselves in the foot.  The November military assisted transition (MAT) in 2017 brought to a close 38 years of dictatorial administration under Mr Robert Mugabe, associated with genocide, human rights abuse, violations of the rule of law, non-compliance with Constitutional dictates and near total international isolation. 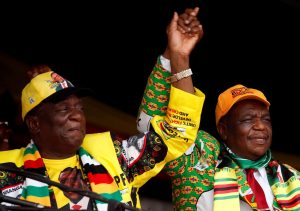 The MAT was accompanied by massive popular support for the army and the small team around Mr Mnangagwa who engineered the whole thing.

The new regime was given a cautious welcome by the international community, led by Britain who argued that the leadership should be given the opportunity to put their house in order and thereby secure international recognition and support.  In July 2018 we held national elections, which although they were flawed, resulted in a narrow victory for the incumbent President and his team.  However, the Elections also produced a House of Assembly, which although controlled by a majority in the ruling party, was in fact deeply divided between the warring factions in Zanu PF.  The reality is that Emmerson Mnangagwa went into the Election and came out of it as a national leader with scant support in existing political structures.

The conflict in the cockpit of the State was clearly visible from the early days of the Mnangagwa government, centred on a struggle for power and influence between the military (both political and professional) and the Presidential team.  In fact, of the Cabinet that Governed the country between November 2017 and July 2018, the President only had minority control and influence, making decisions on major issues very difficult.

In addition to these problems of a political nature, the deeply imbedded corruption that involves virtually everyone in Government, proved to be both resilient and capable of defending itself.  Despite the formation of a Commission to investigate and prosecute corruption, virtually no prosecutions have taken place.  The President found it necessary to dismiss his Prosecutor General simply because of non-performance.  But of greater significance was the rush by those who control the corruption and the proceeds thereof, to support the individuals in the new government who had the capacity to protect their interests.

The consequence was an intensification of the conflict in government and in Zanu PF with those responsible for state capture, using their money not only to protect their interests but the try and direct the affairs of State.

The new government formed after the Elections was more coherent.  However, the new Executive contained five individuals without any significant political roots and while the rest constituted individuals loyal to the President, unlike the first Executive formed in 2017, they also represented Constituencies with little national standing.   The President successfully removed from the Executive the old guard who were virtually parked at the Zanu PF Headquarters in Harare.

The problems facing the new President in Zimbabwe are deep rooted and well established.  They include a highly militarised civil service and entrenched interests in all the pillars of the State and the economy associated with corruption on a scale which severely constrains national growth and stability.

The Presidential team, is tiny constituting no more than a handful of individuals loyal to Mr Mnangagwa.  The forces ranged against him are formidable including a powerful MDC minority in Parliament which is implacably opposed to his rule and the disaffected elements in the ruling party that he has had to push aside in order to take power.  In addition to these problems he has to deal with individuals who are ambitious and wish not only to retain their posts in Government at all costs but to seek greater control over the affairs of the State.

These elements are hostile to the reforms which Western Governments consider essential in the pursuit of recognition and re-engagement. These conditions lay the foundation for the situation which confronted the new President when he was planning a State Visit to Russia and several former Russian satellites.  Intelligence had informed the President of the potential for nationwide disturbances and an effort to secure control over the State itself while he was out of the country.

Not sufficient recognition has been given to the new regime for the many changes which have taken place since November 2017.  These include reforms in the way future elections will be conducted, changes in the media sector and most significantly changes in the security sector.  In respect to the latter, the Joint Operations Command, which was essentially a dual administration under Mr Mugabe, has been de-politicised and restructured so that the armed forces and the security services are now led by professional officers without political authority or influence.  The new structures are totally loyal to the new President.  The thousands of retired military officers who, under Mugabe, were fully integrated into the Civil Service as a third force to ensure compliance with presidential orders and dictates, is being slowly unravelled.  The Police and CIO have been completely restructured under new management.

However, the President has not been able to significantly curb corruption and has turned to his new Minister of Finance who is not a politician but a well-respected Economist, with a mandate to bring back a free market economy and fiscal and monetary stability.  Mr Ncube has mapped out a programme of reform which involves, dealing with the fiscal deficit, liberalising imports and giving control over foreign exchange income to the individuals and companies involved.  Reforms involving a reduction in the retention of foreign earnings by the Reserve Bank and a move away from the RBZ mantra of an exchange rate which puts the Bond note on a par with the US Dollar, to a system where 80 – 100% of all foreign earnings will be retained by the individuals and companies concerned and the Reserve Bank paying a market related exchange rate for the 1 billion dollars or so that are going to be swept into the RBZ accounts each year.

What remains outstanding in this programme of reform is the demonetarisation of the Bond note and the adoption and implementation of a new currency, controlled and administered by a professional, independent Monetary Policy Committee. I expect that process to be completed by mid-2019.

The effects of these reforms has been to bring Zimbabwean macroeconomic fundamentals back into sound territory, to devalue existing stocks of RTGS and Bond currencies to a more manageable level and to float the local currency against the US Dollar and the SA Rand.  Another consequence has been a rapid escalation of inflation which is now at hyperinflation levels and will remain at this level until the monetary situation stabilises.  My own view is that once all foreign inflows are valued at a market rate, the rate of exchange to the US Dollar will settle down at 2 or 3:1 against the US Dollar.  As I have said on several occasions recently, this will make the new currency for local transactions the strongest currency in the Region.  Once stability is reached in the exchange rate and people are able to buy and sell foreign exchange freely on the open market, I would expect inflation levels to decline sharply and resume a more normal pattern of 3 to 4% per annum.  What is unavoidable is another massive reduction in the real value of accumulated financial assets.  Not as extreme as 2008 but nevertheless reducing the value of money balances by as much as two thirds.  Zimbabweans will have to rebuild their liquid assets using the more stable currency as they did in 2009/13.

This leaves the President with the task of dealing with the conflict in the cockpit over the way forward and the prospect of instability because of rising prices and reduced living standards.   The last minute decision to increase fuel prices to open market levels to curb consumption, was the straw that broke the camel’s back.

The President left Zimbabwe for Russia and 2-days later mayhem broke out on the streets in the cities and towns of Zimbabwe.  The Acting President reacted by attending the meeting of Security Heads on Monday morning and demanding the imposition of a State of Emergency with Marshal Law.  What his intentions were are not clear as the situation hardly justified such extreme measures.  The Security Chiefs refused to comply but the Army moved immediately to restore order and control.  The closure of the internet completed the task and Zimbabwe literally ground to a halt for 3-days.  Hundreds were arrested and there have been reports of widespread looting, burning vehicles and buildings and human rights abuse and even torture.  Almost as if the Administration automatically reverted to the practices that had prevailed during the worst periods of the Mugabe regime.

The consequences have been catastrophic for the new administration from a public relations and international point of view.  This is not being assisted in any way by the manner in which the authorities responded to the crises. Mr Mnangagwa was forced to cancel his Davos visit and flew home to take charge.  Upon his return conditions rapidly settled down and life in Zimbabwe returned to normal.  But the damage was done.

Has the conflict in the cockpit been addressed, I think so?  Will it enable more rapid reform; I hope so?