AOH scores a first as disadvantaged communities get university certificates

Source: AOH scores a first as disadvantaged communities get university certificates | The Herald

THERE were scenes of jubilation characterised by song and dance when 855 Epworth residents, who were in the pioneer classes of Zimbabwe Open University (ZOU) and First Lady Auxillia Mnangagwa’s Angel of Hope Foundation open learning partnership designed to empower communities, graduated at a colourful ceremony in Epworth yesterday.

The students included former ladies of the night, widows, the youth and people living with disabilities-men and women.

Some of the graduates openly wept while others sang praises to the mother of the nation for placing them on the pedestal of success through education.

The programme is ongoing and the second intake starts in January next year.

There were lots of prizes for the best students that included laptops, monetary prizes, shopping vouchers from Edgars and Jet shops, textbooks, cellphones, and knapsack sprayers.

The graduation was yet another realisation of the First Lady’s tireless efforts to empower the country’s citizens through education and equip them with skills to fend for themselves, while also contributing to the country’s macro-economic development. 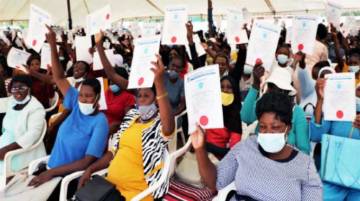 Evas Mutyanda said, “I studied commerce, Entrepreneurship, Counselling, Arts and Culture, Nurse Aid, and Early Childhood Development. I am so excited to have studied these courses because I did not afford to go to school. When I heard the First Lady encouraging people to register I took part.

“Epworth was being looked down upon, it was being labelled a place of mischief and drug abuse. I am thankful for the chance we were given by the First Lady, we managed to change this bad name through education.”

Among the graduates who punched the air with happiness was Mrs Nelia Mukondwa (48) who sang praises for the First Lady, wishing her more life and energy to spread her love throughout the country.

“I am grateful that I learnt counselling and now I have a job in my hands. I can now do things I never dreamt of because I have been empowered. I never expected I would graduate and be handed over a certificate by dignitaries who did so to me today. I now look forward to uplifting my community the same way I was uplifted. Shuwa iniwo zvangu kuita graduate reZOU, I still cannot believe it,” she said while beaming with pride.

One of the youths Linda Murenzvi (21) echoed similar sentiments.

“I am happy for this programme because most young girls were abused when some parents did not have money to send them to school, they would send them to the Booster to get money for food. (The Booster is a hub for prostitution in the sprawling settlement of Epworth). I thank the First Lady for this programme as I am now emancipated and can look for a job and do something on my own. We are happy that Amai is doing all in her powers to destroy prostitution and drug abuse in our area,” she said.

Widowed Gogo Esther Nyambiya 64 was on cloud nine, describing the First Lady as an Angel of Hope as she fought back tears.

“We are grateful for what the First Lady has done for us in Epworth. Personally, I was not educated and had ended in Standard 3 after my parents passed on and had no one to help me proceed with education. I am a widow and my husband died in 2003 while all my four children passed away leaving me with six grandchildren to look after. Life was difficult, therefore I am thankful for this rare window that has been opened for me by the mother of the nation. I will surely make use of my certificate and be able to feed my grandchildren” she said.

Mr Samuel Marwodzi (52), who got disabled after a stroke, was among the graduates and thanked Amai Mnangagwa for giving him a rare chance to change his life.

“I did disability and sign language course. Today I am overwhelmed with joy because I am holding a ZOU certificate which I never dreamt of holding. I will deploy my sign language skills at clinics and police stations which are sometimes visited by people who cannot speak.

“Such people cannot explain themselves fully so that is where we will come in handy. Amai is empowering communities and in Epworth prostitution was rife but we now have faith that with this empowerment, these women will change following these courses they have received courtesy of the First Lady’s AOH and ZOU partnership,” he said.

Mr Douglas Matatani (52) who studied Disability Advocacy and Sign Language, Business Studies and Entrepreneurship thanked the First Lady for her initiatives which he described as game-changers.

“I am so grateful that she has uplifted our community. With these certificates, I will stand up and fight for people living with disabilities. I want people to know that disability does not mean inability,” he said.

A 15-year-old girl, who was the youngest in the group, shared a harrowing story of neglect after her father had married a second wife. She dropped out of school while she was in form two and said with her certificate, she Is now going to look for a job and better her education.

The teenager was named best student nurse aid and received a prize for her exploits.

In a speech read on her behalf by Higher and Tertiary Education, Innovation, Science and Technology Development Minister Professor Amon Murwira, the First Lady said hunger for education translated to hunger for answers to problems.

Education, she said, had a vital role in empowering impoverished girls and women out of poverty and providing them with the means to participate fully in their communities.

“Education holds the key to a better life. Education is the most powerful tool for creating economic growth and impacting future generations with far wide-reaching economic and social gains. Quality education, particularly for the underprivileged communities is a prerequisite to sustainable development of individuals, their communities, and the nation at large. Thus, it is not the certificate which you are getting today, but how you are to use the acquired knowledge as represented by your certificate,” she said.

Angel of Hope Foundation in partnership with ZOU for community development through open learning, she said, took quality education as education that was meaningful, worthwhile, and responsive to social needs of the community regulated by the principle of entitlement.

The mother of the nation said there was free access to university education so as not to leave anyone behind as the country moved towards attaining an upper middle income society by 2030.

“Lower quality education, measured by lower value and added to cognitive achievement, leads to higher dropout rates. Interestingly, the opposite was happening here in Epworth. I heard of high-quality education measured by high value and added to cognitive achievement which led to higher enrolment rates some of which reached unimaginable levels. For this, let me applaud the Zimbabwe Open University for a job well done and yourselves for being excellent students,” she said. 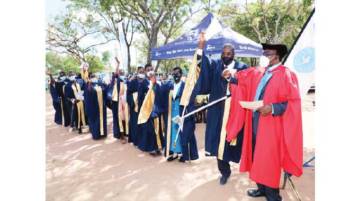 Zimbabwe Open University Vice Chancellor Professor Paul Gundani celebrates with some of the outstanding graduates who benefited from the scholarship partnership between First Lady Auxillia Mnangagwa’s Angel of Hope Foundation and the university during a graduation ceremony in Epworth yesterday. — Pictures: John Manzongo

Amai Mnangagwa implored the less privileged to take advantage of the ongoing arrangement with ZOU saying, “do not let your situation reduce you to a nobody. I brought the Zimbabwe Open University to Epworth for you are worth more than you can imagine mundangariro dzangu.”

Many girls and women living in disadvantaged communities such as Epworth, the First Lady observed, never had the chance to access quality education and realise their dreams due to social exclusion perpetuated by living under difficult conditions.

She said this pushed her organisation to join hands with ZOU to give people rare opportunity of earning a university education without having paid any tuition fees.

She paid tribute to the sponsors and material facilitators of Angel of Hope Foundation in partnership with ZOU empowerment through open learning project certification ceremony.

ZOU vice chancellor Professor Paul Gundani said the inaugural certification ceremony will go down in history as the day Angel of Hope Foundation in partnership with ZOU confirmed to the Epworth community that they meant to fulfil what they promised in September.

“Amai, let me profoundly thank you for taking Angel of Hope and ZOU to Epworth community for in doing so you held us by hand to take Education 5.0 to the people as we left our ivory towers to be with people for you are a mother who teaches by setting an example. If it was not for you, ZOU would have never known kuBooster. Education remains the most important means to socio-economic transformation for Zimbabwe,” he said.

Prof Gundani said the partnership with Angel of Hope Foundation had the potential of transforming lives through open learning and urged residents to be ready for the second intake which starts in January next year.

Songs like “Ebenezer” and “Ichava nhoroondo kana tasimudzwa muhuruva” which are pregnant with meaning, captured the happiness as the graduates sang along walking into the glory of tomorrow armed with an education certificate.