SALARY negotiations between civil servants and government yesterday ended prematurely after some workers’ union representatives stormed out of the meeting, accusing their employer of not being committed to improving their welfare. 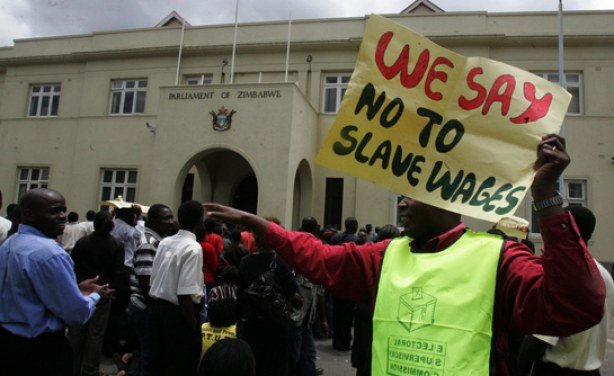 Apex Council leaders, however, said they had given government up to tomorrow to come up with an improved package or they would declare a full-blown strike.

But Progressive Teachers’ Union of Zimbabwe (PTUZ) president Takavafira Zhou later accused the Apex Council of making unilateral decisions, adding that since they were not consulted on the latest decision, they were going ahead with the planned industrial action.

“Apex Council decisions are done collectively and not unilaterally. The recent unilateral statements allegedly by (chairperson) Cecilia Alexander that Apex Council has postponed industrial action to open room for negotiations is unfortunate and has no locus standi,” he said in a statement.
“Alexander must make decisions after consulting Apex affiliates. That she has unilaterally given a statement without consulting affiliates reveals her flirtation and romance with the employer.”

Zhou said they “cannot continue to negotiate for infinity”, adding teachers would withdraw their labour until the impasse was resolved.

He accused the Apex Council of betraying the struggle and called for the realignment of the body.

“Our withdrawal of labour is certainly not synonymous with a shutdown. Let expedient elements desist from hijacking labour issues,” Zhou warned.

The rift between the civil service body and unions was visible as some union leaders refused to brief the media on the outcome of the meeting, while others implored the Apex Council leadership to show character and not deviate from the “agreed position”.

Civil servants are demanding $1 733 for the least paid worker.

Initially, the union leaders met with government at the National Joint Negotiation Committee, but no new offer was presented.

Government recently offered a 22,7% cushioning allowance and 5% per month to its workers on a sliding scale between January and March, but the offer was shot down as pittance.

David Dzatsunga, the Apex Council secretary, told journalists that they would be meeting government again tomorrow.

“The most important part is that the government is not taking civil servants seriously,” he said.