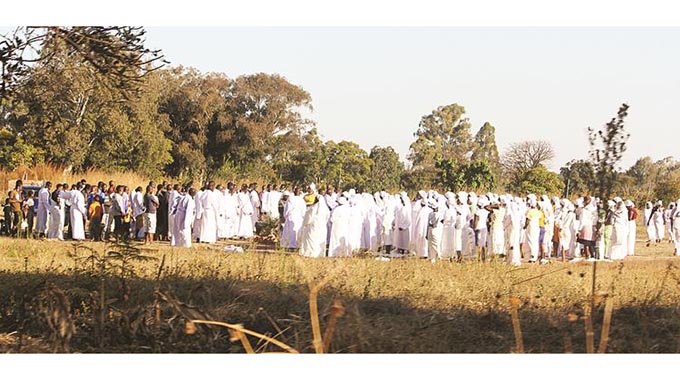 ‘‘I would like to confirm that the police have arrested two church leaders of Johane Masowe eChishanu sect for convening a gathering during the lockdown,” Mahonde said.

“The two are Moffat Phiri (34) and Emmanuel Bango (28) both from Chikuti in Hurungwe district.

“The two convened a gathering for the purpose of worshipping on July 15, 2021 at around 12.00 hours at Magaisa business centre near Kasimure.

“We received a tip-off from members of the public and police reacted swiftly and found a group of 40 members of the sect gathered at the shrine. They will appear in court soon.”

She warned members of the public against attending gatherings during lockdown.

“As police, we are warning members of the public to desist from gatherings as these are Covid-19 super spreaders,” Mahonde said.

“Hurungwe is one of the declared hotspots so we must be worried if no action is taken.

“I also want to warn would-be offenders that the police will leave no stone unturned. We will continue to deploy heavily and offenders will be brought to book.’’

Ironically, for the past two weeks, police in Mutare reportedly turned a blind eye on a Johanne Marange pilgrimage in Bocha, Marange, which was attended by thousands of faithfulls.

The Zimbabwe Lawyers for Human Rights formally complained to the police over the gathering by the sect which is politically linked to the ruling Zanu PF party.

Gatherings that include church services were banned last month as Zimbabwe is battling a third wave of the Covid-19 pandemic.