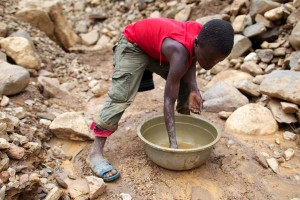 In a statement at the weekend, FPR said the informal sector miners’ output had risen from 1,46 tonnes in August to 1,49 tonnes in September.

The artisanal miners, long criminalised but encouraged by government in recent years to shore up the country’s gold production, are, however, wary of the irregular engagements between them and the government on a number of issues regarding policy, among other things.

In its report following a visit to Mount Darwin FPR said: “What was clearly evident (from the Mount Darwin visit) is that artisanal miners are keen on playing their role in building a better Zimbabwe. All they yearn for is a regular engagement and feedback from those tasked with the responsibility to lead… They also want gold buying agents that are accessible to them. To the police they want an alignment between words and deeds.”

Early last year, the Reserve Bank of Zimbabwe (RBZ) enacted a “no questions asked” policy to enable FPR to access gold produced by artisanal miners who for decades have been illegally mining and selling the yellow metal on the black market.

Zimbabwe’s nearly half an million artisanal miners contributed about 10 tonnes of the precious metal to FPR during the first half of this year representing a 3,9 percent growth compared to the same period of 2016.
This year, the RBZ is targeting to receive some 25 tonnes from the sector.