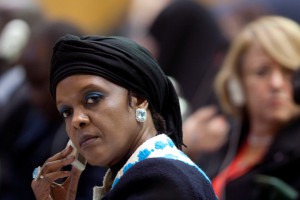 ON Tuesday night, state television announced that police had “launched a manhunt for political renegade, Magura Charumbira, over an incident that happened on Saturday during the Presidential Youth Interface Rally held at White City Stadium in Bulawayo.”

“Charumbira is said to have incited others to heckle the First Lady, Dr Grace Mugabe, during her address at the rally.”

Over time, many wine-fuelled debates have been held over what exactly constitutes a Kafkaesque experience.
This is not one of those debates. But the absurdity of the police hunting down someone over the heckling of arguably the country’s most publicly profane political figure, who routinely lashes hobbled opponents from her bully pulpit, is distinctly Kafkaesque.

North Korea has been cited as the contemporary state closest to Kafka’s imagined society in The Trial.
In December 2013, it was reported that North Korean leader, Kim Jong-un, had ordered the execution of his uncle and the country’s second most powerful man, Jang Song Thaek.

Jang’s fault? He had clapped “half-heartedly” when Kim was elected chairman of the country’s central military commission.

In November 2014, ZANU-PF’s Manicaland information and publicity secretary, Supa Mandiwanzira, flanked by provincial co-ordinating committee member, Joseph Mujati, issued a statement on behalf of the province.
The ZANU-PF Manicaland provincial executive, he said, had decided to pass a vote of no confidence on three senior party provincial executives, including then chairman, John Shumba Mvundura.

One of the reasons for the trio’s ouster was given as: “Appearing aloof during First Lady Amai Dr Grace Mugabe’s rally at Sakubva Stadium on October 10, 2014.”

Deductive logic establishes a pattern linking the two states, which happen to be historical allies.
Recent political developments in Zimbabwe suggest the southern African country’s leader is quite keen on extending the parallels to dynastic politics.