As Zimbabwe Prepares to Vote, Robert Mugabe Resurfaces With a Message 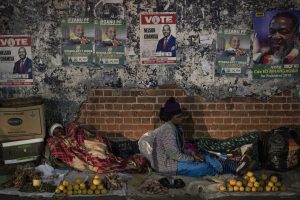 The 94-year-old former president said he would not back his party’s candidate, Emmerson Mnangagwa, who ousted him with the army’s help in November.

Source: As Zimbabwe Prepares to Vote, Robert Mugabe Resurfaces With a Message – The New York Times

EPWORTH, Zimbabwe — As he buttonholed voters less than two days before Zimbabwe’s general election, the opposition candidate worked the crowd alone and on foot. He bounced from voter to voter, a wide smile across his face, ready with a handshake and a joke.

In past elections, before Robert G. Mugabe was ousted in November after 37 years in power, opposition candidates were harassed by ZANU-PF, the governing party, and by the police. Their rallies were quashed, posters yanked down and candidates intimidated, often with violence.

“I’ve been doing my rallies, meeting the people, and there were no disturbances. Everything is going peacefully,” said the candidate, Batandai Masunda, who was running for ward councilor with the main opposition party, the Movement for Democratic Change Alliance. “It’s a very big improvement,” he added.

How big an improvement was the critical question as Zimbabweans prepared to vote on Monday, the first time without Mr. Mugabe atop the ZANU-PF ticket since independence in 1980.

Many Zimbabweans say they expect cheating if the race for president is very close, or if no presidential candidate wins a simple majority and there is a runoff. ZANU-PF’s candidate, Emmerson Mnangagwa, is widely believed to have orchestrated vote-rigging in the past and to have led campaigns of repression.

After serving as Mr. Mugabe’s right-hand man for decades, Mr. Mnangagwa ousted him with the army’s help in November.

At a last-minute news conference at his home on Sunday, Mr. Mugabe, 94, said he “can’t vote for those who have tormented me.” He said he would cast his ballot for a presidential candidate other than Mr. Mnangagwa, indicating that he favored Nelson Chamisa, the presidential candidate of the Movement for Democratic Change Alliance.

It was not clear how the comments from Mr. Mugabe, who has not been politically active since his ouster and who is deeply unpopular, might affect the election’s outcome.

Opposition politicians, voters, rights groups and international election observers — allowed for the first time in decades to observe the polls — say that campaigning has been much freer than in the past.

At the same time, the governing party has continued to exploit its grip on the security forces, the state news media and other state resources to favor its candidates in the months leading up to the election.

Opposition parties and election observers have raised questions about the integrity of the voter rolls. And it is far from clear how voting will take place on Election Day, especially in the governing party’s rural strongholds, where widespread election fraud has ensured victory for Mr. Mugabe’s party in past votes.

Since Mr. Mugabe’s ouster, Mr. Mnangagwa has tried to remake Zimbabwe’s image by portraying the government as business-friendly. He has appeared often at investors’ conferences, wearing warm, colorful scarves to offset his fearsome reputation as Mr. Mugabe’s former henchman.

But to revive the economy, it would help if Mr. Mnangagwa can carry out a fair election — one that will satisfy international observers and Western governments enough for Zimbabwe to qualify for loans from the International Monetary Fund, the World Bank and other international creditors.

Some progress has been made. For the first time, opposition parties have been allowed to campaign in previous “no go” areas. The Movement for Democratic Change Alliance — whose candidate, Mr. Chamisa, succeeded Morgan Tsvangirai, the longtime opposition leader who died in February— has held large rallies in the countryside without major problems, according to election observers.

Epworth — a poor township on the eastern outskirts of Harare, the capital — had been one of the areas to avoid for the opposition. Residents in neighborhoods that supported the opposition suffered the consequences from the police and from youths supporting the governing party.

“In the previous elections, we had to abandon our homes and go to the countryside after we were beaten up,” said Loveness Shagunda, a supporter of the main opposition party. “After we voted, our homes were burned down.”

Ms. Shagunda said she was “happy” about the current peaceful campaign season. She and other residents in a commercial area of Epworth said that since Mr. Mugabe’s fall, they felt free to express themselves. Now, posters of opposition candidates were displayed on walls and street corners, next to those of ZANU-PF.

But Ms. Shagunda was nervous that in a possible runoff between Mr. Mnangagwa and Mr. Chamisa, the governing party would revert to its old habits.

On Saturday morning, Ms. Shagunda sat on a bench outside a bar playing museve, Zimbabwean dance music. Young men went in and out with bottles of beer.

On the main road snaking through the township, people sold clothes, vegetables, sugar-cane stalks, lumber, handmade furniture and other goods of the informal economy that has taken over Zimbabwe in the past decade.

Even evidence of the tiny formal sector spoke of the nation’s economic collapse. Inside a booth, Simbarashe Matsungo exchanged electronic money, called EcoCash, for American dollars or a parallel currency, the Zimbabwean bond note. Though all the currencies are officially worth the same amount, the manipulation of supply has fueled wild swings in the exchange rates that benefited the politically connected.

But Mr. Matsungo was in a good mood. The opposition had just held a rally in the area without any incident. “There was no noise,” he said.

Mark Bondera, who was wearing a Green Bay Packers T-shirt, stopped by to chat with a shoe repairman plying his trade in front of the bar.

Mr. Bondera, too, was enjoying the newfound political freedom. But at 64 he had been around long enough not to let his guard down. In the 2008 election, he noted, the opposition leader won more votes than Mr. Mugabe in the first round, but was forced to withdraw from the runoff because of violence from the governing party.

Across a dirt road, at Cozycare Pharmacy, Brian Chikandiwa, 23, was excited about voting for the first time.

“If it’s free and fair, there will be change,” said Mr. Chikandiwa, who had just completed his pharmaceutical studies.

Because of Zimbabwe’s history of election fraud, Mr. Chikandiwa and many other voters said that only an opposition victory would be proof of a legitimate ballot.

That is why, observers say, Mr. Mnangagwa’s government should have redoubled efforts to persuade Zimbabweans of the fairness of the vote. Instead, there is a widespread assumption of cheating, which raises the risk of violence once results are announced.

Election officials have failed to fully satisfy observers and the opposition of the integrity of the voter rolls — a problem in a country with a history of “extremely deficient” voter rolls, said Patrick Merloe, an observer with the National Democratic Institute, which is operating in Zimbabwe in a joint mission with another nongovernmental organization, the International Republican Institute.

Election officials argued that they were not constitutionally required to show evidence of how the voter rolls were compiled.

“Things have been done that are maybe in compliance with the law but certainly aren’t providing that great deal of confidence,” said John Tomaszewski, an observer with the International Republican Institute.