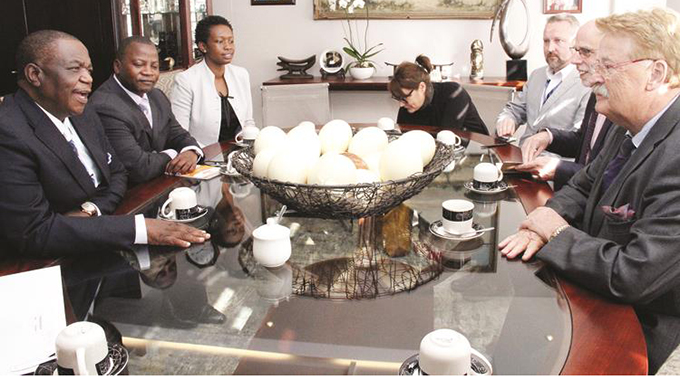 Innocent Ruwende Senior Reporter
THE European Union Election Observer Mission in Zimbabwe says it is impressed with the “freer” atmosphere currently prevailing in the country ahead of today’s harmonised elections. In an interview after paying a courtesy call on Vice President Constantino Chiwenga yesterday, head of EUOM Mr Elmar Brok said he hoped that the election day will also be free of violence.

“We discussed the campaign and what may happen afterwards. We exchanged views and compared notes. I have to say the elections have a freer atmosphere than earlier elections, but there are also shortcomings we discussed like the role of the Zimbabwe Electoral Commission,” he said.

“We hope that the election day will be free of violence and we will see whether the standards for developing democracy are met or not before we make our final judgment about the situation here. We hope there will be a peaceful atmosphere again after elections.

“We have to wait for the election day. We will compare our notes with our people on the countryside. We have no opinion on who should win. We are here to look into the procedure whether the standards which are given are fulfilled. We will not intervene in any political decision.”

The European Union Election Observation Mission (EU EOM) to Zimbabwe deployed 44 long-term observers throughout the country ahead of the harmonised elections.

The team is staying in the country until the completion of the electoral process and then prepare a comprehensive final report.

Together with diplomats accredited in Harare, the EU EOM is expected to deploy about 140 observers from all 28 member states as well as Norway, Switzerland and Canada.

In a statement last month, High Representative for Foreign Affairs and Security Policy and Vice President of the European Commission Mrs Federica Mogherini said the Zimbabwean elections were key for the future of Zimbabwe.

She said the future President, Parliament and local government councils would have the responsibility of steering the transition process in the country.

“I am confident that the mission under the leadership of chief observer Mr Brok will make an important contribution to this electoral process,” she said.