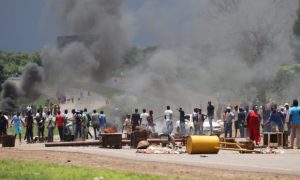 Of particular concern is the persistent attacks on human rights lawyers and doctors over the last four weeks
by State and non-State actors through the media. These attacks include but are not limited to:

1. The Herald newspaper through a number of articles on 28 and 30 January 2019 making several
false allegations against human rights lawyers, who it accused of attacking the judiciary and
attempting to effect a regime change.

2. On 5 February 2019 a shadowy organisation – Citizen’s Forum attacked ZLHR members for
offering legal representation to individuals, who had been arrested and charged for allegedly
participating in anti-government protests held in January 2019. Citizen’s Forum made some
baseless and spurious allegations against ZLHR accusing the organisation of organising the
protests and being responsible for causing the deaths of people and loss of property. The so-called
Citizen’s Forum followed this up by visiting ZLHR’s head office in Harare on Thursday 7 February
2019 and handed in a petition, giving ZLHR an ultimatum to respond to its demands within 48
hours failing which it would besiege the organisation’s offices. An independent check by ZLHR has
confirmed that leaders of Citizen’s Forum, Lonias Rozvi Majoni and Hosiah Mviringi identify
themselves as affiliates of the ruling ZANU PF party.

3. Following the attack on ZLHR by the Citizen’s Forum, the Zimbabwe African Union Patriotic Front
Youth League, made several statements attacking lawyers who were representing those who had
been detained or been arrested in connection with the January 2019 protests.

4. On 16 February 2019, the President – Emmerson Mnangagwa also made disturbing utterances
condemning lawyers, doctors and nurses representing those who had been arrested in connection
with the January 2019 protests and threatened undisclosed action against them.

The statement by the President is the latest in a series of attacks against lawyers representing individuals
arrested and charged with committing several offences during the anti-government protests held in January
2019.

ZLHR is extremely concerned about the safety of its lawyers and staff members as well as the doctors who
have been providing support to the injured human rights defenders (HRDs).

These unwarranted attacks on lawyers, doctors, nurses and other HRDs for carrying out their legitimate
activities are unacceptable as being in direct violation of international norms and standards, the
Constitution of Zimbabwe and the rule of law.

Although ZLHR accepts everyone’s right to express themselves, it is pertinent that such rights should be
enjoyed without threats or instilling fear in HRDs of harassment, intimidation, assault or fear for lives.
ZLHR is also concerned that the recent attacks on lawyers undermine the rights of lawyers to be able to
consult freely with their clients and to represent their clients in court to provide effective legal representation
as enshrined in Sections 50 and 70 of the Constitution.

The intimidation and harassment of lawyers breaches Article 7 of the African Charter on Human and
Peoples’ Rights and Article 14 of the International Covenant on Civil and Political Rights, which guarantee
the right to legal counsel of one’s choice.

Further, the United Nations Basic Principles on the Role of Lawyers, guarantees the right of all persons to
be assisted by a lawyer to protect their rights and to defend them in all stages of criminal proceedings.
The Basic Principles on the Role of Lawyers also provide that governments must ensure that lawyers are
able to perform all of their professional functions without intimidation, hinderance or harassment and that
lawyers are not identified with their clients as a result of discharging their functions.
ZLHR calls on the Government of Zimbabwe to cease targeting of lawyers and other HRDs for doing their
work and take acti