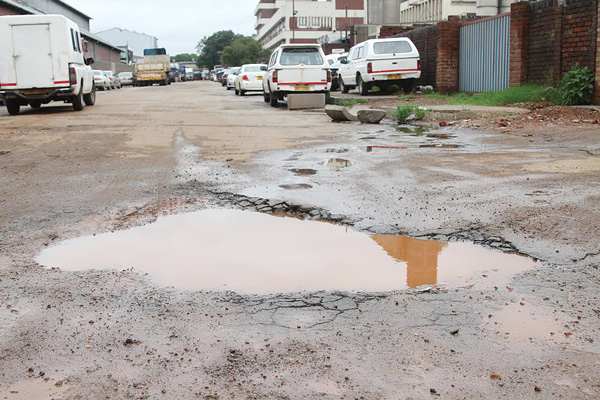 Government declared roads in the country a state of national disaster to pave way for funding for rehabilitation works. The government emergency road rehabilitation programme 2 (ERRP2), spearheaded by the Transport ministry, is being carried out in two phases.

A latest council report of the environmental and engineering services committee however shows that the government budget for the city was not enough, leaving the council with a task of meeting the shortfalls.

“The ERRP2 programme was being resourced through funds mobilised from different sources including funds which had been earmarked for 2021 routine maintenance from Zimbabwe National Road Authority (Zinara) and devolution Funds meant for road works,” the council report reads in part.

Zinara is a statutory body empowered to collect and manage road fees from various sources such as tollgates for onward disbursement to the rural and urban councils for approved road maintenance works.

This means council will this year not be receiving Zinara funds for routine maintenance as they have been diverted to ERRP2.

“The surfacing of minor roads which were funded under devolution had been deferred to next year while the routine maintenance which was funded by Zinara would leave a gap and the requirements was approximately $15million per month which would need to be funded from own resources,” the council report adds.

“It was resolved that the departments of Financial Services and Engineering Services hammer out the mechanism to set aside approximately $15 million per month which is the requirements for road routine maintenance works to cover the gap created by withdrawal of Zinara fund.”

Bulawayo’s roads are in a poor state and flash floods experienced in recent days have worsened the situation.

In 2019, council was forced to turn to individuals, community groups and companies for road maintenance work, pleading that they volunteer to rehabilitate roads under an ‘Adopt-A-Road’ concept.