Bigwigs to appear before Parly 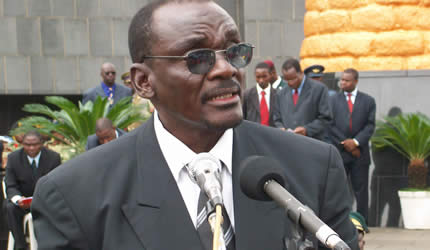 Source: Bigwigs to appear before Parly | The Herald April 9, 2018

Bulawayo Bureau
Three top officials are expected to appear before the Parliamentary Portfolio Committee on Mines and Energy today as the probe into the mining of diamonds from Chiadzwa goes a gear up. Vice President Kembo Mohadi in his capacity as former State Security as well as Home Affairs Minister, former Defence Minister Dr Sydney Sekeramayi and former State Security and Presidential Affairs Minister, Mr Didymus Mutasa, will appear before the committee.

Committee member Cde Tongai Muzenda confirmed today’s hearings.
“The committee is sitting tomorrow at 9am where we are expecting more officials to appear,” he said.

Last week committee chairperson Mr Temba Mliswa said the summoning of current and former high-ranking Government officials did not mean that they are guilty, but was only part of investigations into the alleged looting of diamonds at Chiadzwa during ex-president Robert Mugabe’s rule.

“We are not saying that they are guilty, but we would like to find out whether they knew about the concessions and who was running the concessions because all this information is very necessary.

“They have been summoned, they have received letters already and it’s done. VP Mohadi, Dr Sekeramayi and Didymus Mutasa have received their letters. They are definitely coming.”
Mr Mutasa last week confirmed receiving the letter and his attendance.

“I have received my letter to attend on Monday and since I am being called by Parliament, I will attend,” he said.
Mr Mliswa said they were working to conclude investigations and come up with recommendations.
He said the committee intends to leave no stone unturned in investigating the alleged diamonds looting at Chiadzwa and was keen to interview former police Commissioner-General Dr Augustine Chihuri whose whereabouts remain unknown.

Comm-General, Godwin Matanga, former Home Affairs Minister Ignatius Chombo and former Mines and Energy Minister Walter Chidhakwa and officials from the Zimbabwe Mining Development Corporation (ZMDC) have appeared before the committee in connection with the probe.

Comm-Gen Matanga appeared before the committee and said he was not aware that the police force had a mining concession at Chiadzwa diamond fields in Ma- range.

He told legislators that he had only read about it in the media and his predecessor, Dr Chihuri, was better placed to explain further.

On two occasions, Dr Chihuri failed to appear before the committee with Comm-Gen Matanga revealing that they had failed to locate him.