Like yesterday, I remember the day that Ian Smith declared independence from Britain. I was driving down what was North Avenue in Salisbury when the car radio broke into its programming to make the announcement. 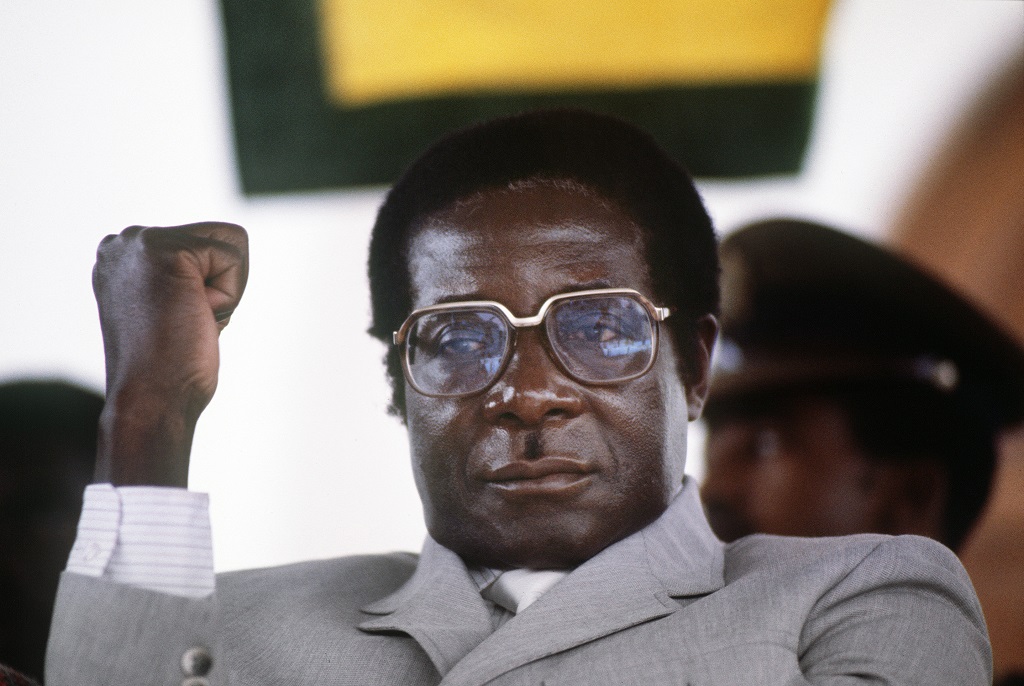 Zimbabwe’s Prime Minister Robert Mugabe clenches his fist, in July 1984 in Harare stadium during a meeting. Mugabe, Zimbabwean first Premier (in 1980) and President (in 1987), was born in Kutama in 1924 (formerly Southern Rhodesia). Largely self-educated, he became a teacher. After a short periods in the National Democratic Party and Zimbabwe African People’s Union (ZAPU) he co-found, in 1963, the Zimbabwe African National Union (ZANU). After a 10-year detention in Rhodesia (1964-74), he spent five years in Mozambique gathering support in preparation for independence in 1980. (Photo by ALEXANDER JOE / AFP)

I sat in my car and listened with a sinking heart. I knew what was coming – isolation, sanctions and conflict. I knew it was going to be a rough road and while the majority of the white community celebrated, I knew it was futile posturing.

Years later, I sat on the floor of the lounge of friends in Highlands while 35 of us eight – all young Executives in business, presented our analysis of the situation and argued with the Prime Minister, Mr Smith, that he had a limited window to negotiate an end to the war and to secure a planned, internationally assisted transition to majority rule. After hearing us out over two hours, Mr Smith rejected our hypothesis and said “We are going to win this war and in the process, we are defending Christian civilisation.” In 6 months 80 per cent of those young executives, arguably the cream of our society, had left the country.

Just three years later, I was with friends in another suburb of Salisbury to listen to the Prime Minister make a statement on National TV after talks in Pretoria with the South African President and the American Secretary of State. In his statement, he stated he had accepted the principle of a managed transition to majority rule. We celebrated, for us, a small minority of the white Rhodesian population, this was what we had worked for and had prayed for to bring to an end 40 years of struggle by the majority black population, culminating in a civil war where brothers killed each other with enthusiasm in a futile struggle for ascendency.

It took another three years of bloodshed and failed attempts to manipulate the outcome of Pretoria before finally, the United Kingdom was able to convene a meeting in London backed by the global community to negotiate a transition to majority rule. Although the process was led by the Foreign and Commonwealth Office, the United States was represented by two outstanding representatives from the State Department and the Intelligence Community. Also present were senior representatives of the African group known as the “Front Line States”.

The American involvement after the Kissinger agreement in 1976 was in the form of those same two officials who participated in the Lancaster House talks four years later. Both went on to be appointed Ambassadors of the USA abroad. As the Chief Economist of the AMA in Salisbury, I became friends with both men and tried to help in the process by making sure that they understood the dynamics of what was going on in the country. The CIA representative was one of the brightest men I have ever met and one of the most deceptive – you had to be careful what you said to him as he missed nothing. He went on to write the CIA background briefing notes on Zimbabwe in Washington. The man from the State Department was likewise, but very likeable and smart, after Independence, he came back to Zimbabwe as the US Ambassador.

Like myself, both men knew that real Independence was coming and that when it did, one of the major political Parties would come to power. We knew it was essential to try and prepare them for what was coming. In 1979 to Americans asked Zanu and Zapu to nominate two teams of individuals whom they felt would play a key role in the Independent State. They did so and these two teams were invited to the USA for an intensive series of briefings on how the country functioned and what the challenges would be. The Zapu team was led by Ariston Chambati and the Zanu team by Charles Utete.

The Americans brought in a number of experts on the country drawn from academia and the State Department and the Intelligence agencies. I was brought in from the country as an expert. We were housed in New York State in a centre made available by the Graham family – owners of the Washington Post. We were there for nearly 3 months, working every day, through the issues that would face the new government. Very little was known about the economy and three of us from Rhodesia, all senior economists were brought in to bring some understanding of how the country worked.

On my return to the country, I found a British General had moved in next door and was leading the armed forces and Police brought in to give oversight to the actual transition on the ground. We had many discussions across the fence and around the braai in the back yard. The rest is history. The four armies that had fought each other since 1964 were rounded up and eventually stood down. A representative of the Queen arrived to oversee the process and arrangements made for an election in early 1980. I participated in the election as one of those deployed by the State to oversee the process. The following week we knew it would be Zanu PF who would form the new Government.

On the night of April, the 17th of 1980, we gathered at the Stadium in Mbare Township to witness the transfer of power and the birth of Zimbabwe at midnight. I had an invitation and found myself escorted to a seat just off to the right of the Podium where the flag lowering and raising would take place. Sitting next to me was the representative of the New York Times who, later, was to write very movingly of the event. In front of us was the President of India, Mrs Ghandi. On the Podium was the son of the British Queen and Lord Soames. A very young-looking Robert Mugabe sat in pride of place, I could not see Joshua Nkomo although I knew he was there.

Tens of thousands of our people sat in the stands to witness this changing of the guard after 87 years of occupation and control by the tiny white population who had taken the country by force in 1893. It marked the end of Dominion Status achieved by the Rhodesians in 1923 when they voted to stay out of the newly created Union of four States in South Africa and rather to adopt Dominion Status within the Commonwealth – like Australia and Canada. It marked the assumption and control of a new majority Government just elected by popular vote under international supervision. We all hoped it marked the end of the war which had affected all our lives in one way or another.

My younger brother who was a strong supporter of Ian Smith and who had no illusions about what was coming was packing up his home and preparing to leave the country. In the next 5 years, he would be joined by over 80 per cent of the indigenous white population. On the field in front of us were soldiers from all the units who had fought each other in what the Americans termed a “low-intensity Guerrilla war”; which had drawn all of us into conflict with each other and cost more lives than the Americans lost in the Viet Nam war.

Exactly at Midnight, a Policeman in his best uniform, boots shining in the strobe lights, stepped forward, saluted and then lowered the Rhodesian Flag. As soon as the green and white were down, the new flag of the Independent State of Zimbabwe was raised accompanied by a roar of delight from the crowds in the Stadium. A new Era was born.

Mugabe went on to lead the country for the next 37 years, Charles Utete to be Secretary to Cabinet for half of that time, a clever man he was known as the “Prime Minister” when Mugabe made himself President. Totally intolerant of any opposition Mugabe crushed Zapu in the first decade and all forms of other opposition in the next. Then 17 years of struggle with the Tsvangirai led MDC.

Now three years into another era, we find ourselves struggling to find our feet economically and our way in the field of global politics. Progress yes, but not enough, but last night at exactly Midnight, State House was lit up by a fireworks display and when we all heard that we turned over in our beds and thought God help us get through yet another year. Maybe next year we will have more to celebrate.