Harare – Tendai Biti, the Vice President of the MDC Alliance was arrested today for coming to The Morgan Tsvangirai House. 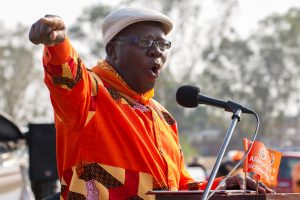 The police and army helped the rival faction of the MDC to seize the building, previously known as Harvest House,  last night.

“We are currently at Harare Central Police Station,” tweeted Hlatywayo this afternoon.