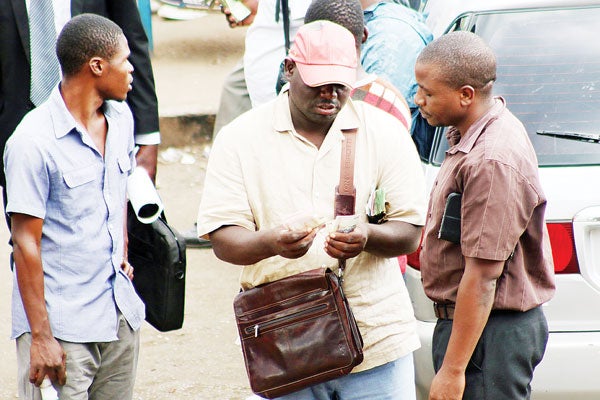 The black market for foreign currency is driving business in the country, with nearly all businesses and travellers in Zimbabwe obtaining their requirements from the illegal market, a survey by the Anti-Corruption Trust of Southern Africa (ACT-SA) has shown.

The government set up an interbank market in February this year for foreign currency trade, but the platform has been hit by shortages of hard currency.

In its survey titled Government’s failure to restore sanity in the financial sector: A case of illegal money changers, ACT-SA said travellers and businesses acquire foreign currency from the black market, even though they know it’s illegal.

“That said, they have no choice since their banks do not give foreign currency. Another follow-up question was asked on why businesses and travellers, among others, prefer buying foreign currency from the black market than banks and bureau de changes.

“This was testified by 50% of the respondents, while another group of respondents feel that there is no paperwork and questions asked at the black market than at local banks and bureau de changes.”

ACT-SA added that one of the reasons for illegal money changers not being arrested is that the majority of them are politically linked.

“Regardless of the illegal nature of the black market, the participants are not arrested. The research sought to understand, why there were no arrests against illegal money changers, among other players in the black market,” the report read.

“A significant majority (60%) pointed out that illegal money changers are politically connected and, hence, are not being arrested. There are no arrests because of the fact that there is no law outlawing the changing of money in the streets.”

The research also showed that the law enforcement agents were to blame for the existence of the black market because of inaction or the turning of a blind eye to the illegal activities.
For example, the survey under review highlights how in May the police raided offices reportedly belonging to Neville Mutsvangwa, the son of Information minister Monica Mutsvangwa and former presidential adviser Chris Mutsvangwa, and found
US$200 000.

Despite this, it was the four detectives who had raided the office who were arrested for under-declaring the money seized.

The case of Neville, who has long been alleged to be a major foreign currency dealer, spilled into Parliament the following month.

ACT-SA recommended that relevant authorities should strengthen laws dealing with illegal money changers and that local banks should give foreign currency to entities and individuals who only need it for business outside the country.

Commenting on the issue, economist John Robertson said banks should be disciplined in order to get rid of the black market because they are the ones who are sustaining it.

“The banks have to be disciplined; they are the ones sustaining the black market. Some of the banks are complicit on the issue of foreign currency exchange rates,” he said.

“The black market has become a serious problem causer in this country as it has contributed to the rise in inflation, increases in prices and rise in everyone’s cost of living. It has also caused distortion in tax revenues and has led to reduced investor confidence in the country.”