ZINWA spokesperson Mrs Marjorie Munyonga said the exercise was being done in consideration of the prevailing rainfall patterns, which were becoming more erratic as the effects of climate change began to set in.

ZINWA spokesperson Mrs Marjorie Munyonga said the exercise was being done in consideration of the prevailing rainfall patterns, which were becoming more erratic as the effects of climate change began to set in .

“Because of the current wet spell, drilling of the boreholes has slowed down and focus is now on equipping the drilled boreholes

Of the targeted 504 boreholes, 51 of them are in Manicaland, while 53 are in Midlands.

Matabeleland South has 47 while 105 are in Masvingo.

Mrs Munyonga said the targeted 35 000 boreholes under the Presidential Rural Development Programme in the country’s eight rural provinces, would be in place by 2025.

“The boreholes will among other functions, provide drinking water for communities, provide the establishment of nutritional gardens, orchards, fishery projects and water for dip tanks.

In this initiative, ZINWA was working with other Government agencies such as ARDA, Tobacco Research Board, Agritex, the Department of Veterinary Services and the Fisheries Department.

Drilling of boreholes in communal areas under the Presidential programme started following the initial handover by the Government, of eight drilling rigs to ZINWA.

The eight rigs, procured from India, together with tractors and other assorted drilling equipment, were part of the 50 drilling rigs procured by the Government for the implementation of the presidential rural horticultural programme.

Government aims to drill at least one borehole in 35 000 villages across all provinces where people will have increased access to clean and potable water.

The Minister of Lands, Agriculture, Fisheries, Water and Rural Development Dr Anxious Masuka said upon completion, millions of citizens in rural areas would benefit from the programme. 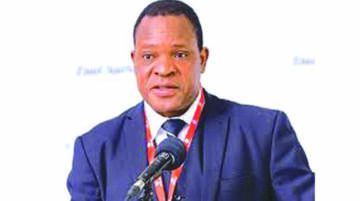 Under the borehole drilling scheme, even urban areas would also be targeted for improved clean water supply with Harare and Chitungwiza expected to get over 200 solar-powered boreholes with another 20 being drilled in Marondera. Other cities would also benefit from the scheme.

“We are excited by this successful climate proof concept which now paves the way for accelerating the implementation of the presidential rural development programme.

“The dignity of women and girls will be restored as they will not have to walk long distances to get water,” said Minister Masuka .

Apart from providing clean water for the residents, the boreholes are also expected to facilitate the undertaking of different livelihood projects.

In Mangwe for example, the local community is now food secure and financially independent as a result of the presidential horticultural project.

In Makorokoro village, Mangwe District, Matabeleland South province, the gardens are both a source of nutrition and cash. On average each of the 142 households has been receiving US$45 monthly in addition to being paid the National Employment Council rates for their labour.

Prior to the Presidential intervention, the community was wholly dependant on subsistence farming.

Outlining the Government’s vision during the launch of the nationwide water supply programme President Mnangagwa said the Second Republic had intervened even in urban councils, through availing clean water to the people.

“We have secured investors from Dubai, United Arab Emirates willing to partner the Government by availing clean water to the people. In a short space of time they responded by drilling boreholes which we are launching,” said President Mnangagwa.

The President said besides availing clean water to the people, the Central Government was also rehabilitating roads.