The underside of the 206-metre long Rwenya River Bridge in Mashonaland East Province which is being reconstructed after being swept away by the rains a decade ago.

Reconstruction of the key Rwenya Bridge in Mudzi district in the far north of Mashonaland East and carrying the near-border road that links Mudzi with Manicaland, is expected to be complete this year, with the Zimbabwe National Roads Administration (Zinara) pumping $30 billion into road upgrades last year.

The reconstruction of failed infrastructure, repair of damaged roads and general restoration of high-quality road communications are all part of the Emergency Road Rehabilitation Programme 2 (ERRP2), a major programme of the Second Republic as it converts policy on paper into roads and bridges that people can walk, ride and drive along.

The contractor at Rwenya Bridge, Bitumen World, is already working on putting concrete on the decks, while pedestrians are now permitted to use part of the bridge to cross the river, which is currently in full flow following the heavy rains in the river’s catchment.

On completion, the total project cost for the 206m-long bridge, which is 3,66m wide, will be around $5 billion.

The Rwenya bridge was swept away by heavy rains more than a decade ago, paralysing socio-economic activities between the two provinces at their northern end.

Mashonaland East provincial roads engineer Mrs Martha Ndoro said there was notable progress and the contractor would also work on approaches from both sides as part of the contract.

“As you know, there are 1km stretches on either side where the road is to be rehabilitated and surfaced, so the contractor will work on that upgrade soon. The good thing is that the contractor first worked on the ground works of the bridge, so now we are not worried with the increase in flowing water as they are now working on the top side of the bridge. So there is progress at the bridge.”

Mr Shingirai Chiriga from Mudzi said the completion of this bridge would have a positive impact on the economic activities between Kotwa and Nyanga districts.

“I am happy that our bridge is under repair after being washed away in 2012. Government has remembered us and we are seeing notable progress. We believe that soon we will be able to cross this river using the new bridge.

“This bridge is critical for our economic activities. We buy timber from Manicaland for sale here in Mudzi and surrounding areas. So we are happy about this development and we thank the authorities for this,” he said.

Mrs Miriam Kangutsi from Nyanga district expressed joy over the pace at which the construction works were progressing.

“It is difficult to visit our relatives in Mudzi and Mutoko from where I stay in Nyanga especially when this river is flooded.  I want to thank President Mnangagwa for this development. Soon, we will be able to visit our relatives, conduct economic activities and access social services from either side of the bridge.

“My wish is for God to keep me alive so that I can walk over this bridge once reconstruction is complete. I am so happy,” she said. 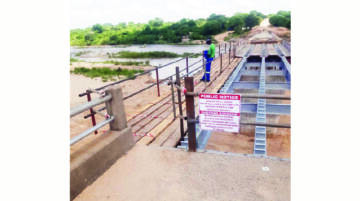 A Bitumen World employee checks on a section of the bridge where the contractor is preparing to put concrete on the decks.

“There is also progress on the upgrade of Hwedza-Mushandirapamwe road and already, the contractor has surfaced 6km which have since been opened to traffic. The contractor is on the ground working around the clock,” she said. The road is also being upgraded under ERRP2.

Hwedza-Mushandirapamwe road links Hwedza district, Marondera and Harare and is necessary for easy transport and commercial activity across a swathe of Mashonaland East.

Zinara yesterday said it had disbursed over $30 billion in 2022 to roads authorities, which includes the Government’s Department of Roads and the District Development Fund, for maintenance and rehabilitation and has pledged to release outstanding funds this year once all requirements a met.

In a statement outlining its disbursement for last year, Zinara also criticised the poor workmanship of some contractors engaged by some local authorities

Its initial budget was $17 billion which was later reviewed upwards to $30,6 billion through the supplementary budget.

“The process of disbursing the funds to the roads authorities in some instances took longer because of the need for road authorities to submit due diligence to Treasury.

“The due diligence reports were meant to confirm whether the pricing in each funding request was fair, before Zinara effects payments. This was part of the Government’s efforts to realise value for money from the contracts entered between the road authorities and their suppliers,” reads the statement.

Zinara noted that most roads being constructed in new residential areas in towns and cities did not qualify for funding for maintenance and rehabilitation as they were yet to be gazetted for funding.

The funding for these roads is supposed to be organised at the planning stage, with the developer carrying the costs and being reimbursed as the plots and stands are sold.

Similarly construction of new roads was also not under Zinara. Again this comes from the national budget or a developer’s budget. Zinara collects vehicle licence fees and toll fees to maintain and repair the network rather than extend the network.

“In the past two years, Zinara has consistently published all its disbursements to road authorities as part of the new thrust by the board and executive to epitomise transparency and accountability in the handling and use of road funds,” Zinara said.

Government has prioritised rehabilitation of roads under the phased Emergency Roads Rehabilitation Programme as part of wider efforts to ensure safe and reliable infrastructure conducive for economic activities.