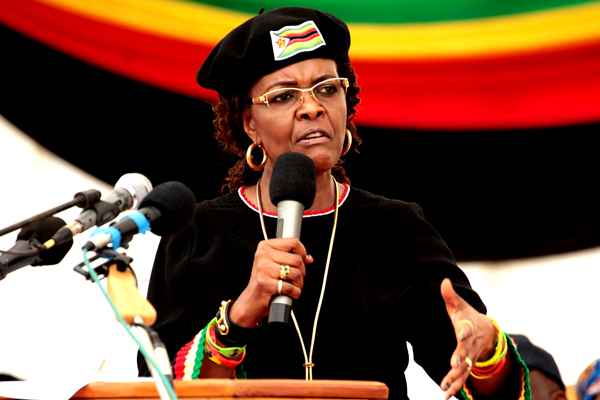 Earlier this year, the 52-year-old reportedly rented a mansion in Sandhurst on a year’s lease for about R25m.

Zimbabwe’s first lady, Grace Mugabe, has reportedly bought a R45-million mansion in Sandhurst, in Johannesburg, sources close to the sale have confirmed.

Grace, Zimbabwe President Robert Mugabe’s wife, reportedly bought the house in February through a shelf company. “It had been on the market for some time, but was transferred in May this year,” said a Joburg North property expert, who asked The Star to not name them.

The property reportedly has rolling lawns, a summer house, koi pond and six reception rooms. It also has four bedrooms and four bathrooms, a two-bedroom cottage and a pool.

An estate agent, who also asked the publication to not name them, said the property needed some renovations despite official documents on the transfer of the property showing Grace spent about R45 million on this 9 249-square-metre property.

Property sources also told the publication the first lady was interested in another property nearby valued at about R55 million.

Earlier this year, the 52-year-old reportedly rented a mansion in Sandhurst on a year’s lease for about R25 million, and lived in it with her staff during her trips to South Africa.

Property experts in the area estimated she could be paying at least R150 000 a month in rent.

Late last year, Grace reportedly bought a R58-million property in Harare from Jan Teede, and the Zimbabwean central bank allowed the cash to be exported to a Mauritius bank account.

Her sons, Robert Jr, 25, and Bellarmine Chatunga, 21, were reportedly paying R500 000 a month for an apartment in Dubai before moving to South Africa, where they rented a flat in Rivonia, for which they paid R70 000 a month before they were kicked out after a drunken brawl that left a security guard injured.

Now the 52-year-old wife of President Mugabe is accused of beating model Gabriella Engels, 20, on Sunday evening at the Johannesburg hotel where her two sons were staying.

Engels said she suffered deep cuts to her forehead and the back of her head, and on Monday, she registered a case with the police, alleging assault with intent to do grievous bodily harm.