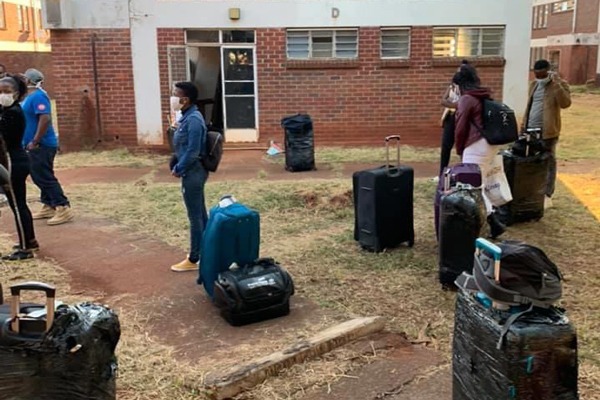 PRESIDENT Emmerson Mnangagwa’s government has slashed the recommended period that residents returning from COVID-19 hotspots should be quarantined from 14 to eight days, due to a cash squeeze. However, health experts yesterday described the decision as suicidal in light of rising coronavirus cases in the country.

WHO demands a strict 14-day quarantine measure by member countries for people coming from other States to contain the spread of the virulent coronavirus that has so far killed over 186 000 people and infected close to 2,7 million others globally.

Many Zimbabweans trooping back into the country from various countries, particularly the United Kingdom, a COVID-19 hotspot in Europe, Botswana and South Africa had been subjected to the 14-day mandatory isolation.

But on Tuesday, Moyo said the country did not have enough resources to look after the increasing number of returnees for two weeks hence had put a new strategy where rapid tests would be conducted on the returnees and after seven days of isolation, those who test negative would be allowed to join their families.

On Wednesday, Information secretary Ndavaningi Mangwana said government had so far forked out $5 million to look after about 900 returnees staying at various quarantine centres throughout the country.

“’The Ministry of Public Service, Labour and Social Welfare has so far spent over $5 million on food and basic needs for 950 returning residents. The cost of accommodation is not included,” Mangwana tweeted.

Mangwana made the disclosure after returnees from the United Kingdom had refused to be quarantined at Belvedere Technical Teachers’ College, claiming the facilities were substandard and exposed them to contracting the virus.
Earlier, returnees from Botswana quarantined at a high school in Plumtree also protested over the squalid conditions they were subjected to, forcing government to relocate some of them to Bulawayo.

Zimbabwe Hospital Doctors’ Association president Tawanda Zvakada said the slashing of quarantine days would result in the spread of the deadly virus.

“It is better to have abundant caution by increasing the days to 21. Reducing the days puts the country at risk of infections. It is unfortunate that government has highlighted the issue of resources, it confirms what we have always said that government is not prepared,” Zvakada said.

He added: “This shows loopholes in the way government is conducting the quarantine. The returnees need strict monitoring and need a designated isolation centre. Who will monitor them as they are going to their respective districts?”
Community Working Group on Health executive director Itai Rusike also raised fears, saying: “The proposal to reduce the number of quarantine days from 21 to eight for returning residents must be informed by the WHO guidelines and restrictions. Before reducing the number of quarantine days at this stage of the pandemic, the government should conduct a COVID-19 – specific risk assessment to determine the level of risk of transmission the reduction may pose and identify areas for modification that could reduce or mitigate these risks. The country still has active COVID-19 cases and local transmission, poorly equipped treatment facilities, a serious shortage of PPE (personal protective equipment) and disgruntled health workers who were always threatening to go on strike.
“The country should have an honest reflection on how effectively are we identifying cases and preventing transmission given our capabilities for case and community testing – the strength of the link between testing and case tracing and quarantine and the time from onset of symptoms to testing, the test-turnaround time and share of tests administered with results pending; the total positive persons and the positive results as a proportion of tests done. This also includes the coverage and impact of case tracing, the level of imported or local transmission; and risk factor co-morbidities of cases. The WHO among others, provides risk assessment and mitigation tools for compulsory quarantine along with several technical guidance,” Rusike said.

The Health ministry has also directed that: “All bodies being repatriated to Zimbabwe for burial will be treated as contagious except in cases where the cause of death is road accident, murder or other body injuries.

“Consequently, all such mortal remains will require clearance by the Health and Child Care ministry in Zimbabwe using the usual clearance channels.

“Relatives accompanying the remains will be subjected to a 21-day mandatory quarantine at the designated points before proceeding to the funeral. (The same applies in cases where the body is transiting through Zimbabwe).

“Only the driver of the hearse is allowed to proceed to the final place of burial in Zimbabwe and is required to return to South Africa immediately after burial.

Following the relaxation of the quarantine conditions, repatriates from South Africa who had earlier been earmarked to stay at a NSSA building in Beitbridge, will now be escorted to their respective districts unless they fail screening tests for which they will be detained.

In a statement to the district development committee yesterday, Beitbridge district medical officer Linus Samhere said more information about the new development would be announced later.

“Good morning. The returnees coming from South Africa will now be screened and documented in Beitbridge then they will be escorted to their provinces as they come. Official communication to this effect will follow,” Samhere said.

Scores of Zimbabweans resident in South Africa are reportedly applying for voluntary repatriation after failing to secure food adequate to last them until after the lockdown period in that country.