Pote Holdings manager, Mr Thompson Mthombeni, said the new feet which will bring to 102 the total number of haulage trucks under the Pote Holdings, was a sign their business was growing.

With some moneybags resorting to social media, showcasing their riches or popping champagne the night away showing-off their wealth via clubbing, there are some who make money in silence and their financial muscle only announcing itself in action.

This is the case with one little known Zvishavane businessman, Mr Antony Clever Pote (49), who in silence, has literally transformed the usually sleepy town of Zvishavane into an awakening giant.

A very reserved man who often times shy away from the public life, Mr Pote runs several businesses in Zvishavane, with many locals only knowing his Chain supermarkets and hardware business.

And maybe, the Pote Hotel.

On Thursday, business came to a standstill in Masvingo and Zvishavane town after a fleet of 72 newly acquired haulage trucks snaked its way from the Forbes borders post to Zvishavane. 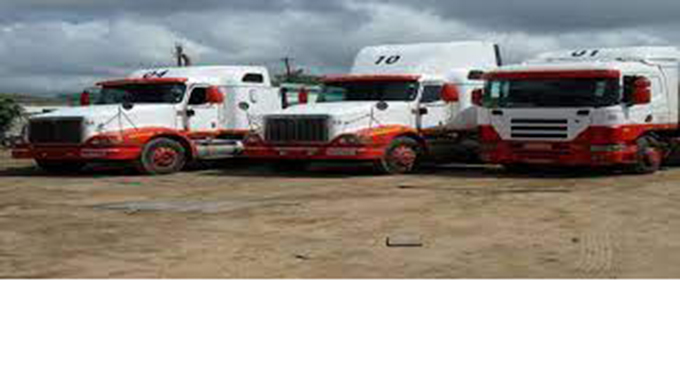 Its was a spectacle as the fleet which stretched for about 100 metres honked, skidded, while announcing its arrival in Zvishavane, sending the usually sleepy mining town alive.

Onlookers and passers-by were forced to reach out for their cellphones to record snippets of the stunts, while others jostled to capture photos of the spectacle.

Branded “Pote Power” in  the company’s red and white corporate colours, the fleet, which was being escorted by a recovery truck and some small cars brandishing red flags, was welcomed with a thunderous roar and wild cheers from members of the public.

The fleet made a beeline along main street as vendors, and other passers-by cheered the “financial muscle” of their local business hero.

“Arira uyo, anorema uyo hona baba, Pote Power” (He is our local hero he has shown his financial power), an on looker was heard saying as he scrambled to get a picture of the fleet.

Shopkeepers, vendors and other passers-by were forced to abandon their business as they stampeded to have a glimpse of the fleet.

Pote Holdings manager, Mr Thompson Mthombeni, said the new feet which will bring to 102 the total number of haulage trucks under the Pote Holdings, was a sign their business was growing.

He said they were humbled by the reception that the fleet got from the people of Zvishavane where the company’s business journey began.

“We opened our business around 2010 and we have grown to become a household name, thanks to the community that we operate under especially the people of Zvishavane,” said Mr Mthombeni.

“They were very happy to see the fleet of the new trucks and everyone came out to catch a glimpse of the new acquisitions.”

Mr Mthombeni said the Covid-19 pandemic had impacted negatively into the business, but they were happy to continue growing.

“The pandemic affected everyone, but we are happy and appreciate the support that we have been receiving from the Zvishavane community and the country at large,” he said.

But who is Mr Pote?

A man who started off as herd-boy, tendering cattle and rearing chicken in his rural Chivi, Mr Pote has grown to be a business force in the country, but has continued to shy away from the public.

Mr Pote (49) says he entered the business world at the tender age of 16 at a time when most of his peers were still relying on their parents for money.

He urged young people to pursue their God given talents.

“A gentleman is shaped at a very tender age and then grows to become one,” said Mr Pote. “We have to catch them (the youth) young and impart entrepreneurial skills to them, for our country to develop.”

Hard work and sweat has seen the ambitious Zvishavane businessman’s empire grow in leaps and bounds.

Trading under Makanaka Investment T/A Pote Holdings, Mr Pote, other than the haulage truck business, owns a number of businesses around Zvishavane town which include Pote Supermarkets, Hardware General Dealers in the town’s high density suburbs of Mandava and Makwasha.

The trucks are often hired by non-governmental organisations and other local business people.

They operate from Zvishavane to places as far as South Africa.

“My transport company was established to help other business people who often face challenges in transport their goods,” said Mr Pote. “Our charges are affordable. We give first preference to local companies. We now have 102 haulage trucks.”

Mr Pote said the vision was to expanding his transport operations to other countries within and outside the SADC region.