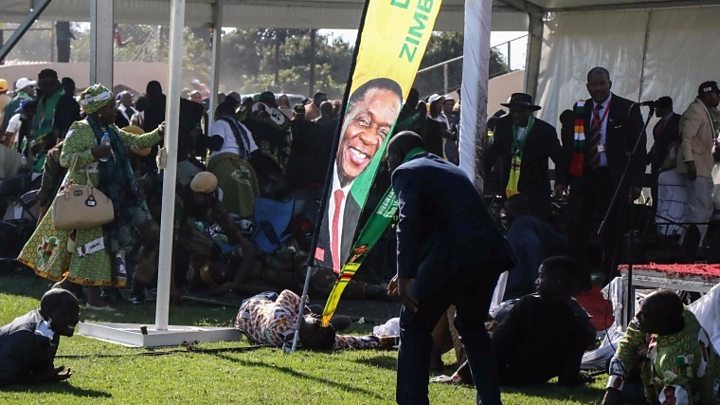 LAST Saturday’s explosion in Bulawayo which claimed the lives of two security officers has exposed the growing tensions between the country’s various security agencies following the ouster of long-time leader Robert Mugabe in November last year, it has been established.

While investigations are currently ongoing, sources in the security sector, who spoke to the Zimbabwe Independent this week, have attributed the horrific hand gerenade attack to infighting, lack of cohesion, laxity and mistrust in the security system.

The blast, which claimed the life of Colour Sergeant Stanley Magunzva of the Presidential Guard and a security aide Nelson Dube, laid bare the war of attrition in the security agencies.

Eyewitnesses and security sources who spoke to this paper said among other security breaches that became apparent in the aftermath of the explosion were lack of metal detectors at entrances and poorly manned entry points all pointing to a lack of co-ordination between the security agencies.

Following last November’s coup which saw the army taking over main security duties of the sitting head of state, relations with other organs became frosty.

During the coup, former head of CIO security Albert Ngulube was left for dead after he was assaulted by soldiers on the night of November 14. Mugabe recently revealed that some members of his security team, mainly from CIO.

A senior CIO officer Peter Munetsi died, while others were injured and tortured. This, according to sources, has contributed to an uneasy relationship between the military and the CIO which had the primary responsibility of providing security to the inner circle of the president. The slashing of allowances for the CIO, another source said, fuelled resentment.

The ensuing purges of intelligence officers and the disarming during the coup of the police paramilitary unit — the Support Unit — also worsened the relationship between the security agencies, sources said. There were also police purges.

“On the fateful day in Bulawayo, not everyone within the security team was armed, which is a big problem. In the past, the close security unit team, Police Protection Unit bikers and members of the Presidential Guard unit would all be armed, but that is no longer the case following the coming in of the new administration,” a source said.

“The most senior member of the Presidential Guard now commands the motorcade, unlike in the past where it was under a senior officer from Police Protection Unit. More so, ever since this new arrangement, the security team has not really jelled together and that could cause problems.”

The Presidential Guard, another source said, is now conducting duties that otherwise would have been better executed by the CIO and police.

“Apart from security at entrances, there were no sniffer dogs close to the VIP tents. This was unimaginable during Mugabe’s times,” a source said.

He added that the movement of the VVIP protection officers was more well-co-ordinated during the previous regime, adding that with more mock drills some threats could have been thwarted.

“As things stand, the police and the CIO guys around feel like bridesmaids while the army has literally taken over everything. On that day in question, for instance, the most senior police officer on the president’s security was an Assistant Inspector,” another source said.

“The president’s escape following the blast also pointed out to lack of co-ordination in that members of the Presidential Guard, who are carried by those Land Cruisers, only caught up with the mini motorcade in the CBD before heading to State House.”

During Mugabe’s reign, the police, who were headed by Augustine Chihuri, were more loyal to the long-time leader, while the CIO, which was then under Happyton Bonyongwe, was also under Mugabe’s budget.

The army, which staged the coup under the command of now Vice-President Constantino Chiwenga, on the other hand, was more loyal to its commanders and Mnangagwa.