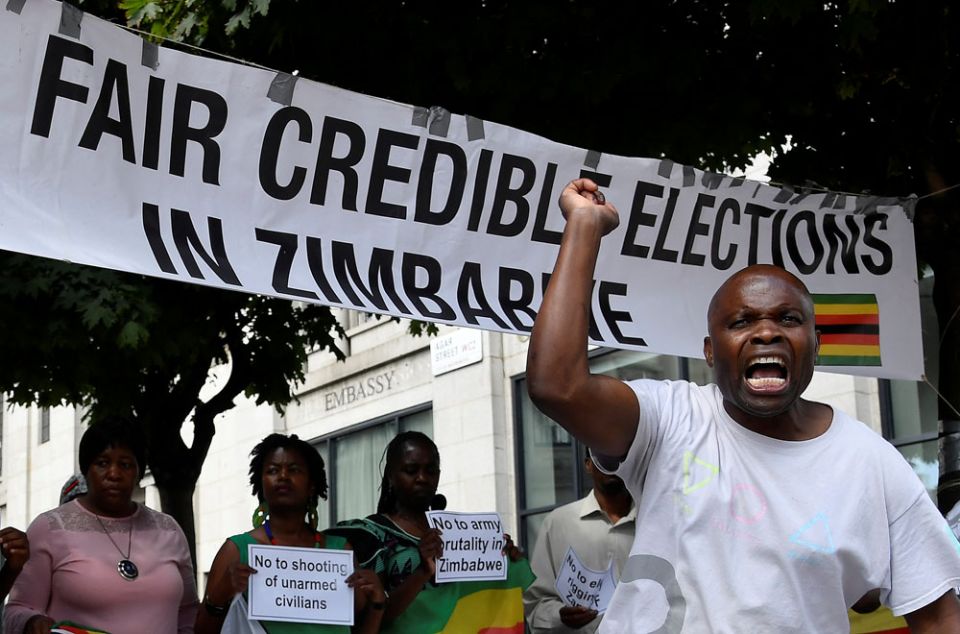 HARARE, ZIMBABWE — Catholic food relief agencies in Zimbabwe are struggling to meet growing demand for aid and say they need extra resources as fears of food shortages swell in the aftermath of the July 30 elections, in which President Emmerson Mnangagwa and his Zimbabwe African National Union-Patriotic Front party emerged victorious.

Zimbabwe’s economy has nosedived in the uncertainty around the confirmation of Mnangagwa’s victory by the Constitutional Court. Prices of basic foodstuffs have been rising as companies and local producers battle to raise forex for imports of raw materials and equipment for manufacturing.

“Most parts of Zimbabwe are already in a state of crisis as a result of prevailing economic challenges, erratic weather patterns, such as drought, and the projected impact of another El Nino in the region, as well as the ongoing impact of the HIV epidemic,” Rita Billingsley, representative for Catholic Relief Services in Zimbabwe, told NCR. “As we head into the lean season, we are already facing an increasing number of people who are unable to meet their fundamental nutritional needs.”

The World Food Program says it is looking for as much as $71.2 million “to address the most urgent food security needs of 1,135,500 people [in Zimbabwe]” in the next few months. Mnangagwa’s government says it is geared to turn around the economy after tasking the newly constituted cabinet.

“I believe they [new ministers] have the capacity to deliver and we would want to develop and modernize our economy,” Mnangagwa said after announcing the cabinet Sept. 7. “This cabinet will have a developmental thrust and I am happy to appoint them.”

Ashley Baxstrom, spokesperson for the World Food Program in Zimbabwe, said in a statement that “vulnerable groups are always disproportionately affected by adverse conditions” and highlighted only about $22 million of the required funding had been raised so far.

Economic growth in Zimbabwe is estimated to be below 1 percent this year while inflation, already above 4 percent, is expected to continue rising, say economists.

Catholic agencies in Zimbabwe provide food relief assistance to vulnerable groups such as orphans, street children and women. There is growing demand for such services as the economy continues to struggle.

“Because of the general state of the economy after the elections, we have to give hope to women and to street children,” he said. “We try our best to provide relief under the circumstances. Many of the street children are completely illiterate and we don’t have enough to cater for all of them, but we make the best of the resources we have.”

The situation in Zimbabwe has been worsened by an urban population that is stretched for income owing to rising unemployment. Mnangagwa was hoping to woo investors to the country but the aftermath of the elections was marred by violence that claimed the lives of six people. The opposition Movement for Democratic Change party, led by Nelson Chamisa, has also charged that the election result was manipulated.

Fambai Ngirande, the Zimbabwe Council of Churches’ director for programs, said that the food insecurity situation is stemming from “income-based poverty” as demand for relief assistance grows across the country.

“We now have an urban poverty crisis because of inadequate nutrition. The urban poverty is likely to worsen especially now that informal traders are to be removed from the streets,” Ngirande said.

Zimbabwe has sought to remove vendors from the streets of major urban centers after a deadly outbreak of cholera in the capital of Harare. The outbreak had claimed the lives of at least 28 people as of Sept. 16, while the government battles to contain it.

Ngirande said Christian relief agencies were stretched for resources as they also have to assist in curbing further spread of cholera. The tasks for Catholic and other Christian organizations are even bigger because of the prevalence of HIV and AIDS.

Billingsley of Catholic Relief Services said more than 2.4 million people will be food insecure in Zimbabwe, adding that “there will certainly be the need for the Catholic Church to respond to this emergency, especially because the church has strong diocesan-level infrastructure that is well-placed” to provide such support.

“There is an urgent need for additional resources if we are to continue our humanitarian and development support to Zimbabwean farmers who are unfortunately facing increasing erratic weather patterns, such as more frequent and prolonged droughts,” Billingsley added. “Children are particularly vulnerable to food insecurity, and nationally more than 25 percent of children are stunted due to chronic food insecurity.”