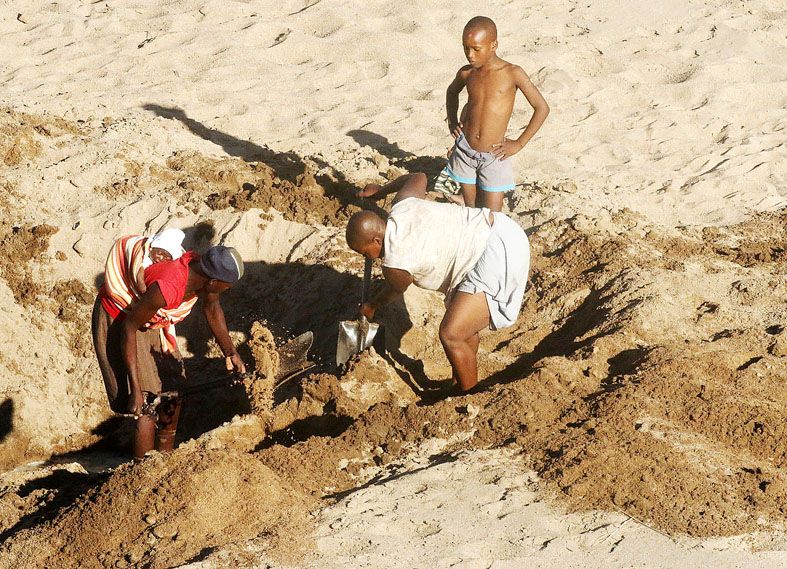 A family digs for fresh water along the Save River in Manicaland, Zimbabwe, as drought conditions shrink water sources, leaving domestic animals and humans short of water. (Tawanda Karombo)

HARARE, ZIMBABWE — These shortages are severely limiting access to such utilities by both citizens and businesses, disrupting economic production and heightening risks of outbreaks of diseases associated with water shortages and poor sanitation.

The Zimbabwe Catholic Bishops Conference (ZCBC) acknowledged the economic and social amenities crisis that Zimbabwe is facing in their Dec. 9 pastoral letter. “The nation is facing shortages of energy, water and other basic commodities. Infrastructure like roads, railways, dams and bridges is in terrible disrepair with little hope of the problems being fixed.”

Are you hosting or attending a climate-related event? Post the information on the EarthBeat Events Calendar.

In March, Cyclone Idai destroyed crops and infrastructure and displaced citizens in Zimbabwe’s Manicaland and Masvingo provinces. Those are regions where the extreme weather phenomenon that many experts blame on climate change was felt the most.

As a result of Cyclone Idai, more Zimbabweans have been left at the risk of hunger. This coincided with a prolonged drought spell, which has also meant that more Zimbabweans will need food aid. The United Nations’ World Food Program (WFP) said in early December that “it plans to more than double the number of people it is helping by January to 4.1 million” as it provides “life-saving rations of cereal, pulses and vegetable oil and a protective nutrition ration for children” under the age of five.

The program said the Zimbabwean hunger crisis was part of “an unprecedented climate-driven disaster gripping” southern Africa, which had given rise to temperatures in the region soaring to more than twice the average global rate. More erratic rainy seasons were also “hitting the country’s subsistence farmers hard,” according to WFP.

Catholic agencies in Zimbabwe have had to intensify their programs and spend more money in the face of climate change and the economic crisis that President Emerson Mnangagwa is struggling to address. Some traditional farming practices and other social practices also continue to worsen climate change in the country.

She added: “Policies focused on managing the country’s carbon footprint and preventing unchecked deforestation are especially important. At the farmer level, crop and livestock farmers are still using practices that might have worked in previous generations, but in the current situation, practices like use of synthetic fertilizers degrade soil moisture and fertility (while) other practices like uncontrolled mining and poor waste management also contribute to climate change.”

She said climate change was impacting Zimbabwean communities through “increasingly frequent droughts, floods, and cyclones” with the growing season becoming longer, “which means farmers have to wait longer to harvest” their crops. “There is a reduction in habitats and specie distribution.”

The government of Zimbabwe says it is working on a policy framework to mitigate the effects of climate change in the country. State media quoted Tirivanhu Muhwati, a climate change scientist in the Environment and Climate Ministry, as saying earlier this month that emissions in the country were largely a result of energy production powered by coal. 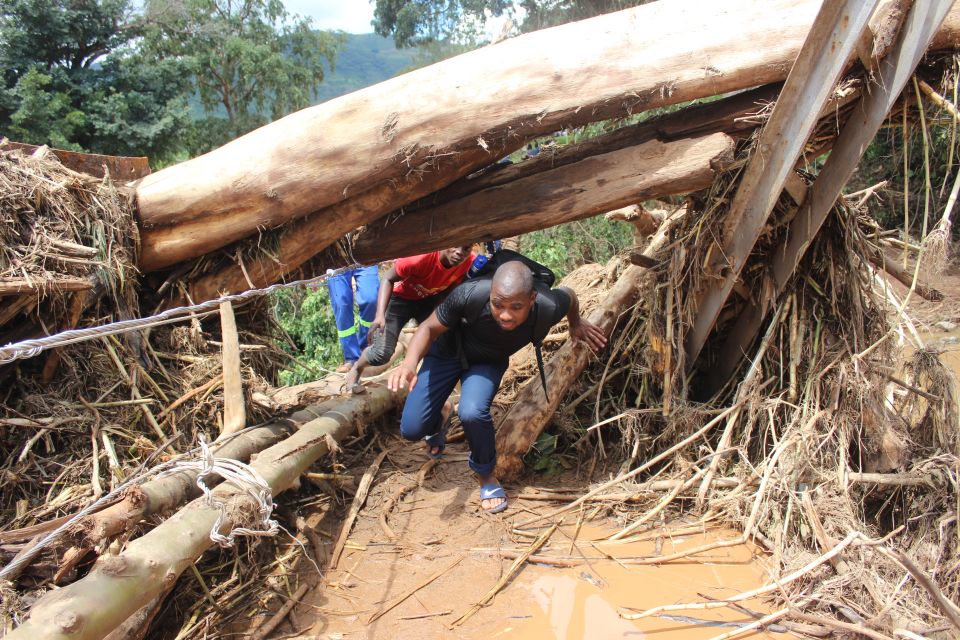 Destruction delivered by Cyclone Idai in Zimbabwe’s Chimanimani area earlier this year. The cyclone left thousands of Zimbabweans without homes and destroyed a wide range of infrastructure. (Tawanda Karombo)

“Most of the emissions in Zimbabwe come from energy consumption so there is a need to reduce the emissions that come from the burning of coal to produce electricity,” he said.

The impact of climate change often cascades down to the wider communities. CRS reports that, in the aftermath of climate change-induced disasters like droughts and cyclones, “there are often disease epidemics like cholera outbreaks.”

They report that malaria and HIV infections “also increase because people are living in makeshift conditions and do not have access to healthcare or basic disease prevention” equipment.

But some interventions by CRS and other Catholic agencies such as Caritas are helping to mitigate the impact of climate change in Zimbabwe. CRS is working with farmers in the country to build their skills in climate-smart crop and livestock agriculture and to provide them with the information they need to anticipate and prepare for climate events.

Takura Gwatinyanya, the program manager for Caritas in Zimbabwe, said by email that its programs are carried out through the Caritas Archdiocese of Harare in partnership with CAFOD community volunteers as well as other stakeholders.

“Climate smart technologies are being promoted to improve access to safe water through the use of renewables like solar, reducing diseases, walking distances, and (the) burden on women and children, promoting economic productivity by providing water for agro-economic activities,” said Gwatinyanya.

The agency is also relying on funding from Caritas Internationalis in its responsive programs in the aftermath of the devastation wrecked by Cyclone Idai, which left around 300 people dead in Zimbabwe.  But limited funding restricts how much can be done. 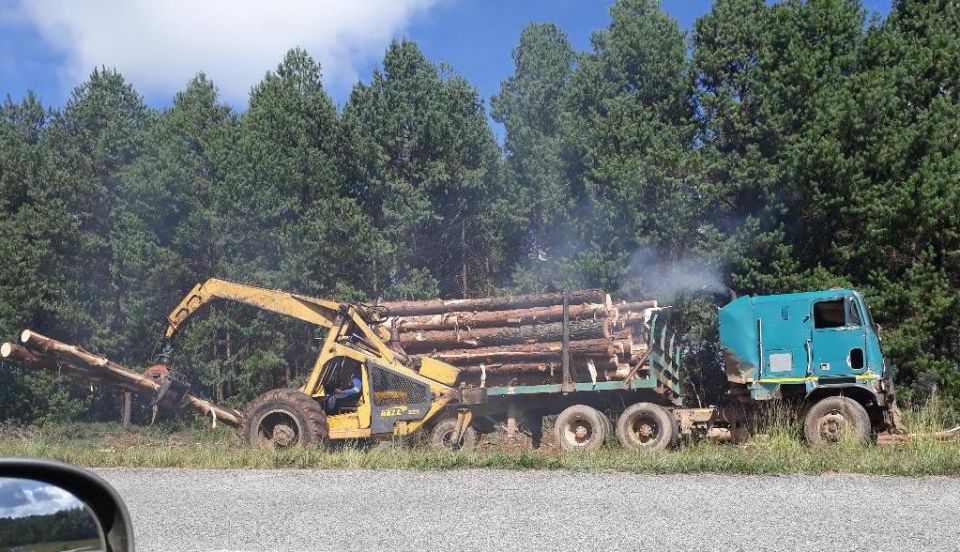 Logging for firewood and industrial wood use is among the major contributors to climate change in Zimbabwe. Trees are also being cut down for charcoal as electricity shortages hit and prices of petroleum and liquefied gas go up. (Tawanda Karombo)

Climate change experts from Caritas and CRS believe that “a greater number of Zimbabweans in the rural and urban areas now rely on firewood for cooking and this has increased carbon emissions as well as overcutting down of trees” and land degradations, according to Caritas.

Logging is a major practice worsening the impact of climate change as loggers destroy forests for firewood or for charcoal. Both have emerged as major power alternatives in the absence of electricity or in the face of rising prices for electricity and other cleaner sources of energy such as gas.

According to the CRS, one of the biggest challenges in the fight against climate change in Zimbabwe is the limited access that institutions and communities have to resources that will support technology, innovations or knowledge-sharing about climate change. The extreme weather conditions and hyperinflation as well as rising fuel and communication costs also make efforts to fight climate change and build resilience difficult, according to Caritas.

Other experts, such as Anna Brazier, who is a consultant in sustainable development, believe communities in Zimbabwe need to develop adaptation plans. She said in Zimbabwean urban areas such as the capital, Harare, companies and businesses need to climate-proof their enterprises especially in terms of water conservation. There is also a need for buildings to make use of low energy and green energy instead of “air conditioning, which is a huge contributor to greenhouse” gas emissions, Brazier said.

“Cities and towns in Zimbabwe need to put water conservation and management plans in place,” she added. “Tree planting in urban areas will help reduce temperatures and help infiltration of water into the soil. All building on wetlands must be banned.”