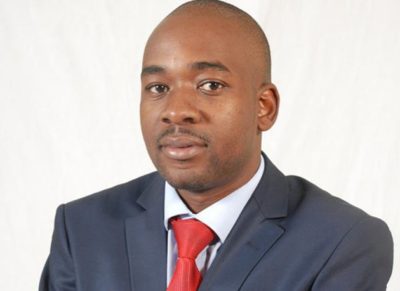 The move comes after the MDC Alliance accused Mnangagwa of blocking special envoys dispatched by South African President Cyril Ramaphosa at the weekend from meeting the opposition’s leader .
The South African envoys — Baleka Mbete, Ngoako Ramatlhodi and Sydney Mufamadi flew out of Harare on Tuesday without meeting the MDC Alliance leader despite scheduling an appointment.

They had also promised to meet civic society leaders but left the country after meeting Mnangagwa only.
In an interview with NewsDay yesterday, Gladys Hlatswayo, the MDC Alliance secretary for foreign relations said mediation can only happen if Chamisa explains the situation obtaining in the country to the outside world.
“The MDC Alliance was not snubbed by the envoys because they had contacted us to schedule a meeting on Monday, August 10,” Hlatswayo said.

“What we know is Zanu PF is not keen on admitting that there is a crisis in Zimbabwe and subsequently working towards a solution to that crisis.”

“I make reference to the first statement by Zanu PF’s Chinamasa that was full of tantrums and insulted ANC [African National Congress] for taking a principled position in support of the battered and suffering masses of Zimbabwe.
“We, therefore, know that the meetings were stopped by Mr Mnangagwa.”

Hlatswayo insisted that following the aborted meeting with the South African envoys, MDC Alliance will now maintain diplomatic pressure to make President Mnangagwa bow down to calls for crisis dialogue.

“We shall continue to build pressure both in and outside our borders to have a credible national dialogue that is mediated in order to achieve comprehensive reforms, including a new social contract, ending the economic and humanitarian crisis, electoral reforms, media reforms, ending international isolation and addressing past human rights violations,” Hlatswayo said.

South African President Cyrill Ramaphosa is yet to issue a statement on discussions made between his envoys and Mnangagwa.