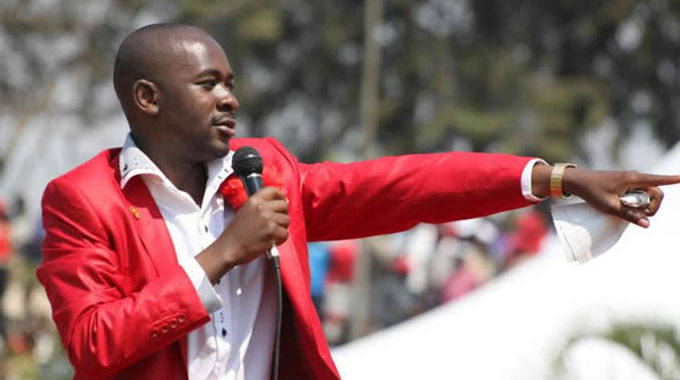 From George Maponga in Masvingo
MDC-Alliance presidential candidate Mr Nelson Chamisa yesterday promised to make Zimbabwe a $46 billion economy over the next five years if he wins the July 30 harmonised elections.

Addressing a campaign rally that was washed away by rains at Mucheke Stadium, Mr Chamisa promised to implement a host of measures to grow the country’s economy.

He promised to remove bond notes introduced by Government to ease cash shortages, saying it was wrong to peg the surrogate currency at par with the greenback.

“If I win the elections, which is obvious of course, we will immediately remove bond notes and introduce a multi-currency regime. We will have a basket of currencies such as rand, pula and pound that will be in circulation until the country’s production levels pick up to a level of sustaining a local currency. It is impossible to peg the bond note at the same level with the American dollar,” he said.

The MDC-Alliance leader repeated his promise of spaghetti roads after winning the coming elections.

“We will expand the country’s economy to $46 billion by 2023 before it rises to a $100 billion economy by 2029. Under my government people from countries like UK and South Africa will come and work here like what Zimbabweans are currently doing. If locals are working in those countries what can stop those from there to also work here,” he said.

Mr Chamisa repeated claims that ZEC wanted to rig the coming elections accusing the elections management body of going to bed with Zanu-PF.

He said his party would not allow the coming polls to be rigged, saying the MDC Alliance will not boycott the plebiscite, but will ensure the ground is even.

He asked President Mnangagwa to hand over power to him, alleging that he has failed to run the country.

The MDC-Alliance presidential candidate regurgitated some projects that have already been done by Government under the new dispensation after promising to re-open the CSC plant in Masvingo which ironically is close to resuming operations after President Mnangagwa toured the facility recently and announced that Government had secured investors for its reopening.

Mr Chamisa promised to introduce “smart governance” upon assuming office and showed he was out of touch with developments in the country after accusing Government of failing to fully-utilise Tugwi-Mukosi dam to create a perennial greenbelt in southern Masvingo.

The dam was only commissioned last year in May and Government has since launched a Command Fisheries project for the province.

The MDC-Alliance leader promised to form a lean Cabinet if he wins elections, but his address was cut short after rains started pounding the stadium.

He introduced former Zanu-PF Chivi South MP Mr Ivine Dzingirai who performed the MDC slogan before the crowd. Mr Dzingirai is standing as an independent candidate in Chivi South