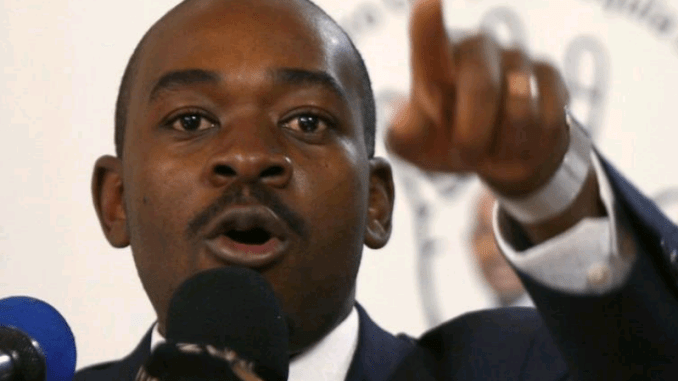 MDC Alliance presidential candidate Nelson Chamisa has threatened to wield the axe on the party’s two power-hungry aspiring MPs after they refused to amicably resolve their dual candidature ahead of next Monday’s polls.

The MDC Alliance fielded two candidates for the same seat for Bulawayo South, Francis Mangwendeza and Kunashe Muchemwa, in the constituency after nomination last month, a development which has caused confusion and division within the MDC Alliance camp.

Speaking at a rally in Bulawayo at the weekend, Chamisa said the two candidates should resolve their matter before the July 30 elections to avoid a split of MDC Alliance votes.

“I have noticed that there are two aspiring candidates in one of the constituencies. There should be one candidate only so that people are not confused. Between the two of you, with the assistance of district party officials, you must sit down and then agree on who is the legitimate candidate,” he said.

Chamisa said he had summoned the organising team to clear the issue and was ready to wield the axe on the stubborn candidate.

“We don’t want power-hungry members. I will have the organising team to deal with the matter once and for all and have one candidate to represent us. This election is not for oneself, but about supporting change. Very soon, we will advise you who the authentic candidate is. All those things are child’s play. Anybody who will try to be stubborn will be summoned to my office and be dealt with severely,” he warned.

“We will have the district executive to deal with the matter, soon we would advise what the way forward is and who will represent us,” he said.