MDC Alliance leader Nelson Chamisa yesterday revealed that his party was planning mass protests to force President Emmerson Mnangagwa and his Zanu PF government out of power in the next two months as the dispute over the July 30 elections escalates. 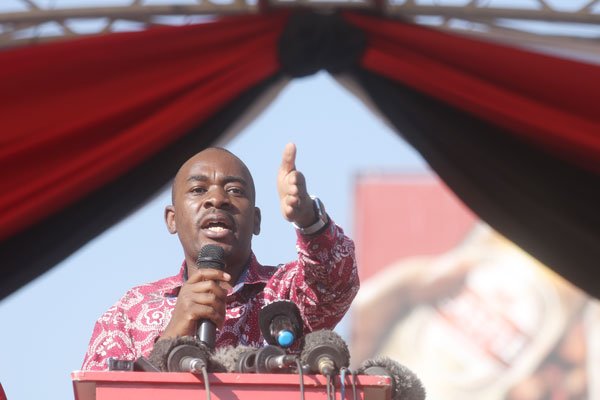 Chamisa told the party’s 19th anniversary celebrations at Harare’s Gwanzura Stadium that he would soon embark on a countrywide tour to mobilise his supporters to take to the streets.

“We are going to be organising ourselves internally, then we go to programmes that we want to do throughout the country from next week,” he said.

“I will be going to every area where I will be setting out the plan, something big in this country — hold your cards on the intended march to State House from this venue.

“When we do this we want to have a clear plan on what date we start and to the day we end.

“We will not go back home until we achieve the intended plan. We will show Mnangagwa the power that people have.”

Thousands of people thronged Gwanzura and cheered Chamisa on as he launched a tirade against Mnangagwa.

He said the protests that would be modelled along the Arab Spring that toppled dictators in Egypt, Tunisia and Algeria would be peaceful.

Chamisa accused Mnangagwa of stealing the July 30 elections and declared that he was not interested in joining a government of national unity (GNU).

“Mnangagwa was saying Chamisa wants a GNU. I am not interested in working with Mnangagwa in a GNU,” he said.

“Why would I want to work with a person who lost the election?

“Mnangagwa must be leading the opposition in this country, while I take the reins of power, which you handed to me, then the country moves forward.

“I heard him say we must move forward, there is no moving forward without looking at the reality of who won the election.

“We will continue to move around instead of moving forward.”

Chamisa said Zanu PF leaders were contemptuous of the people, hence their refusal to enter into dialogue over the political crisis.

“Mnangagwa does not listen, because he does not know the power of the people, he disrespects the youth in your midst. If I instruct the youth to confront Mnangagwa, this country will be ungovernable,” he said.

Chamisa appealed for unity in the party saying they needed to protect the legacy of its late founding leader Morgan Tsvangirai.