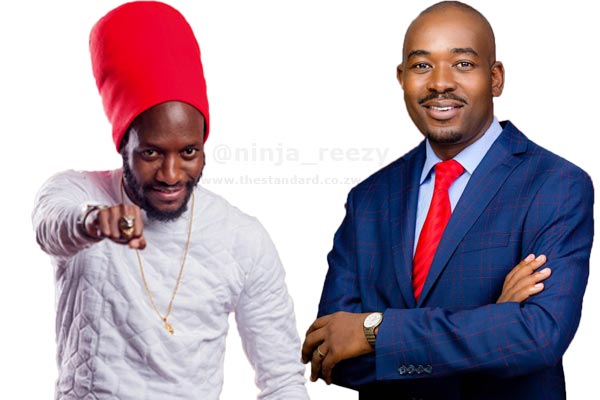 Dancehall artiste Winky D, who has been accused of backing Chamisa with his kaSong keJecha, released late last year, was also denied entry into the giant National Sports Stadium where he was billed to perform before a capacity crowd at the late Tuku’s send-off gig.

MDC secretary-general Douglas Mwonzora described the decision to bar his principal as cowardly and unacceptable.

According to Mwonzora, Chamisa’s entourage was blocked from entering the stadium by state security agents. He said when he went to seek the intervention of Justice minister Ziyambi Ziyambi, he found the gates locked.

“He [Chamisa] came in at around 2pm and state agents manning the gates refused to allow him in,” Mwonzora said.

“The body [Tuku’s body] had just arrived and the proceedings had already started. When he received information that he was not allowed, myself and Murisi Zwizwayi went and tried to engage the government minister particularly Ziyambi Ziyambi. Although the minister seems to have agreed, the people manning the gates closed and locked the gates before going away.”

He added: “This is unacceptable. The person being buried was not known as a member of any political party. His music was unifying. This decision was cowardly and totally unacceptable. He [Chamisa] was unable to go in. We went to complain to Ziyambi because we felt as a Zimbabwean, long-serving MP, and leader of opposition party, he should be allowed to go in, but he was barred from attending the send-off.”

Ziyambi, however, said Chamisa was not barred, but tried to get in with his vehicle when no car was allowed into the stadium for security reasons.

“He wanted to drive in, and this was against the security’s directive. We were all dropped outside the gate,” Ziyambi said.

But sources close to the developments disclosed that Chamisa’s security went and advised the state security that the opposition leader was coming and they were told he would not be allowed in because he would cause chaos through the multitudes of supporters in the stadium.

“They negotiated, but we heard some of the security details saying they would not allow him in and that they would close the main gate so that he uses the small gate where they intended to crowd him off and embarrass him,” a source said.

“Chamisa was told not to come to the gate and Mwonzora was in the meantime negotiating with Ziyambi when the main gates were closed, leaving the said small gate. Chamisa was forced to turn away and leave.”

Winky D was also blocked from entering the stadium and was forced to miss the send-off gig where he was billed to perform.

His manager Jonathan Banda yesterday said: “All I can say is he had difficulties in entering the stadium, he eventually left.”

Winky D was stoned last year in Kwekwe over the song Kasong keJecha seen to be against Zanu PF.

Following the violent protests that led to the deaths of 12 people, injury and arrest of hundreds, Winky D is said to have gone into hiding fearing for his life. He only surfaced at Mtukudzi’s funeral in Norton.

The dancehall artiste jointly produced a song, Panorwadza Moyo, with Mtukudzi in 2016.

Thousands of Zimbabweans thronged the National Sports Stadium to pay their last respects to Tuku, who is set to be buried today in Madziwa in Shamva district.