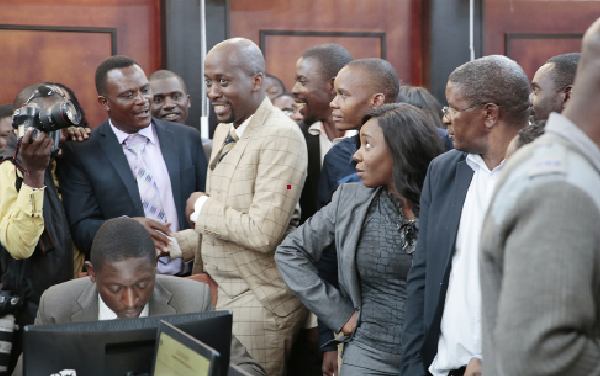 SCORES of aspiring legislators thronged the Magistrates Court in Harare to submit their nomination forms during a lengthy process characterised by chaos and confusion, ahead of the make-or break general elections set for July 30.

The court began receiving nomination forms from prospective candidates from 10am with the process expected to end at 4pm, though it was latter extended after aspirants kept flocking in.

Aspiring candidates from the MDC-T headed by Thokozani Khupe, MDC Alliance led by Nelson Chamisa, and Zanu PF constituted the majority of hopeful legislators and councillors who filed their nomination papers with the Zimbabwe Electoral Commission (Zec).

Notably, MDC-T spokesperson Obert Gutu filed his papers to represent the Khupe wing as a candidate vying for the Harare East parliamentary seat, while Jesse Majome and Fadzai Mahere will run as independent candidates for Harare West and Mount Pleasant respectively.

Zec chairperson Justice Priscilla Chigumba expressed satisfaction with the process, but said the list of aspiring candidates would be verified and confirmed by midnight.

“So I am quite happy, although it looks a bit congested here, the report that I am getting from my team is that by four o’clock they expect to have gone through all the candidates. I understand that most of the people here are not aspiring candidates but party supporters so I am quite sure that we should be able to meet the deadline.”

Chigumba said statistics of aspiring candidates who were turned away for failing to satisfy the nomination requirements would be available once the process was finalised.

Candidates who were vying for parliamentary seats were required to pay US$50, provide proof of residence and submit national registration documents among other key requirements.

“Those statistics I can only avail them on Friday. I do not have those statistics at my fingertips. We will take two or three days to gather those statistics from the provinces,” she said, noting that isolated cases of intra-party violence had been reported but contained.

However, the nomination process was extended by an additional two hours, with aspiring candidates expressing displeasure at the slow pace of the exercise.

MDC Alliance aspiring candidate for Hatfield Tapiwa Mashakada told the Zimbabwe Independent that the process was progressing at a snail’s pace.

“I have successfully submitted my nomination papers, but the process was long and tedious,” he said, expressing confidence that he was going to win the vote in Hatfield.

Zanu PF aspiring candidate for Harare East Terrence Mukupe also expressed displeasure at the slow pace of the process which he described as “chaotic.”

“All I can say about the process is that in the beginning the process was so chaotic and there was no order,” he said.

Zec provincial elections officer Innocent Ncube had to order the closure of the entrance to the nomination court as the aspirants kept flocking into the courtroom.

By 9pm, the Zec team was still battling to finalise paperwork that some of the candidates had submitted. Others had not paid the statutory fees for registration, while other candidates did not have all the requisite documents.

Some of the candidates had to run around at the last minute to raise the statutory fees as their principals who had pledged to make payment arrangements to Zec had failed to pay.

Bulawayo has 12 parliamentary seats, while Harare has 29 slots in the 210-seat House of Assembly.