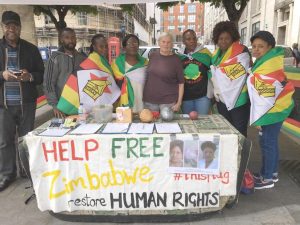 What compassionate people they are, President Mnangagwa and General Chiwenga. A millionairess in Singapore wants to return home to Zimbabwe because her mother has died. So they charter a plane to to go and pick her up. ‘It was a beautiful plane (she said) a brand new Gulfstream 650 from Qatar.’

Not many presidents would do that. Especially if she had tried to poison you and you had been forced to flee your country hotly pursued by a hit squad with orders to kill you.

And especially if the country concerned is bankrupt and the beneficiary is probably its richest woman, with multiple properties at home and abroad. And who thinks nothing of paying a million dollars for a diamond ring and buying her children Bentleys to play with and giving them so much pocket money they can wash $20,000 wristwatches in fine champagne.

Come to think of it, it’s surprising that old man Mugabe didn’t dip into his capacious pockets for at least an economy air ticket home. He can’t be broke, what with his own property empire. And his late lamented mother-in-law certainly wouldn’t have complained at spending a few more days in the mortuary.

The government’s generosity apparently even ran to paying the funeral expenses. It had its rewards: Grace gushed her thanks: Mnangagwa’s leadership was God-given, she said. Even the old man, fearing the prospect of maybe losing many of his illegal farms, said he had now decided that Mnangagwa was indeed the legitimate president.

The Mnangagwa government has been less compassionate to another Zimbabwean lady. She is not asking for charity but has arguably done more for her country – the respected journalist and friend of the Vigil Violet Gonda.

Violet took the opportunity of the new ‘freedom’ proclaimed by Mnangagwa to return to Zimbabwe to report on the elections. Having been based in the UK and the USA for many years, she took the opportunity to apply for a passport as a born Zimbabwean citizen, untainted even by being Malawian, Mozambiquan or white. She was turned down. So much for the new regime. Open for business but not for citizens. But charitable to the rich.