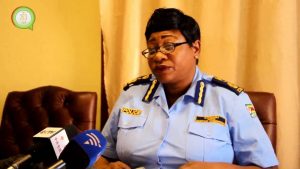 The lies by Charity Charamba are also an indictment, a revelation that the halfhearted attempt to provide a military and police contacts to report violations is not only unlawful but will not work. More than two times the ZRP has changed its position pertaining a report on Sky News in which three members of the security forces are seen assaulting an unarmed civilian with his cuffed behind his back.

The first response was to dismiss the report as biased and fabricated, then came a shocking spin in which the police lied that the video used in the report was from 2016. With the lie short lived and exposed due to 2018 plates on Mercedes appearing in the footage, the police changed its position and indicated that one of the people involved in the violation had instead been arrested.

The MDC is wary of a government which for all intents and purposes listens to defend itself rather than understand what is really going on.  We are therefore suspicious of the version of the arrest of the so-called suspended Constable especially with no mention of the other two who were in uniform.

They were supposed to be charged first for outsourcing torture on a citizen if the suspension narrative is anything to go by.

When reports are made the responsibility of the police is to investigate not deny, otherwise that is only characteristic of the mafia. The police in its statement has proved to be dishonest therefore cannot be trusted with handling law and order.

The MDC is concerned about the rights of Zimbabweans especially where violations are being perpetrated by members of the security forces and the police’s default position is that “nothing like that happened.”

This is a loud call for the urgent establishment of the independent complains mechanism set out in section 210 of the constitution.

Members of the security forces have violated fundamental rights and freedoms of citizens against the provisions of section 208 of the constitution which dictates their conduct.

The people of Zimbabwe have to be afforded an opportunity to seek redress.