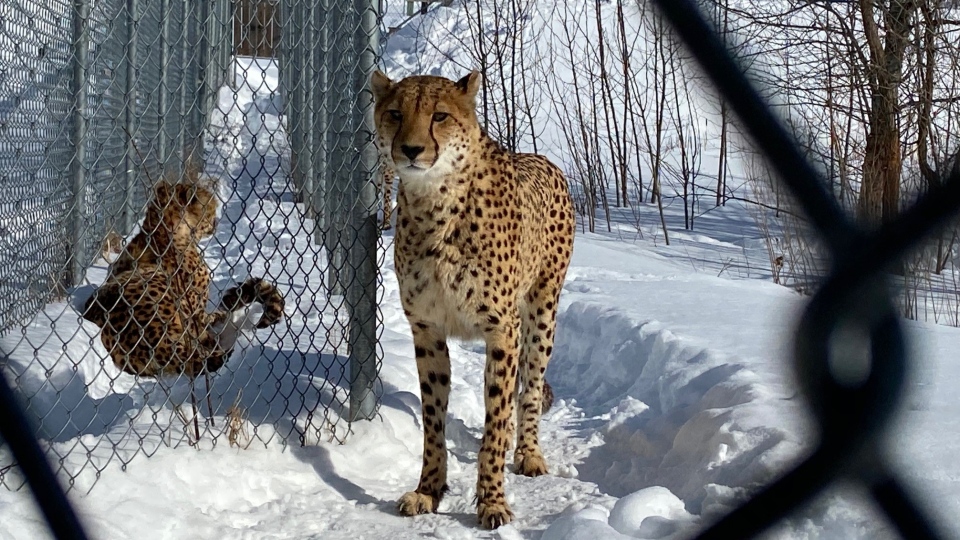 A pair of Parc Safari cheetahs are seen in the zoo on Feb. 8, 2020. (Photo: Christine Long/CTV News)

A year after being transferred to a reserve in Zimbabwe, two cheetahs born in captivity in Canada are faring well in the wild.

Kumbe and Jabari were born in Quebec’s Parc Safari as part of a Pan-American program to breed cheetahs, whose numbers are dwindling in the wild. The two brothers were their family’s sixth generation born in captivity, but the first born in Quebec.

The cheetahs’ journey to Africa last February was a challenge for the animals, who left Montreal where it was -23 C, and arrived in Zimbabwe where it was 25 C.

“The biggest adjustment for them was the weather to shed that winter coat and get used to the African sun,” Parc Safari zoologist Nathalie Santerre told CTV National News.

Once they arrived, they had to undergo two months in quarantine before they could be released into the nature reserve.

But even after a challenging transition, rangers at the Imire reserve who were tracking Kumbe and Jabari with collars said the two young cheetahs began to hunt normally within hours of being released.

“The incredible thing is the instinct of these animals. Their instinct is so deeply ingrained in them,” said Reilly Travers, a conservationist at Imire. “It just comes naturally.”

One year later, the cheetahs have had plenty of practice hunting at Imire, honing their skills on zebras and impalas. Rangers said Kumbe and Jabari are now just as muscular as cheetahs born in the wild.

The next challenge for the cheetahs will be mating in the wild. Santerre said the two brothers are showing signs of sexual maturity, and conservationists are preparing to introduce female cheetahs into the mix within the next year or two, hoping that the brothers’ unique genes – due to being bred in captivity — will help diversify the gene pool of cubs born on the reserve in Zimbabwe.

“Their Canadian background will always be there, but that is past,” said Santerre. “Moving forward they are African cheetahs and they are doing well, and we are very proud of them.”