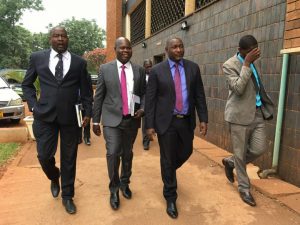 Supa Mandiwanzira on his way to court accompanied by his lawyers.

According to Informed sources, Guvamombe is alleged to have allowed two former ministers, Saviour Kasukuwere and Supa Mandiwanzira to serve internships at the Harare Magistrates court. The two former ministers who served in former president Robert Mugabe’s cabinet are law students at the University of Zimbabwe.

Both men are currently before the courts for allegedly abusing their positions as ministers.

Kasukuwere fled the country during the coup in 2017 but returned voluntarily a few months later to face the music.
The two men became fabulously rich during their time as ministers.