China will not cut ties with Zimbabwe 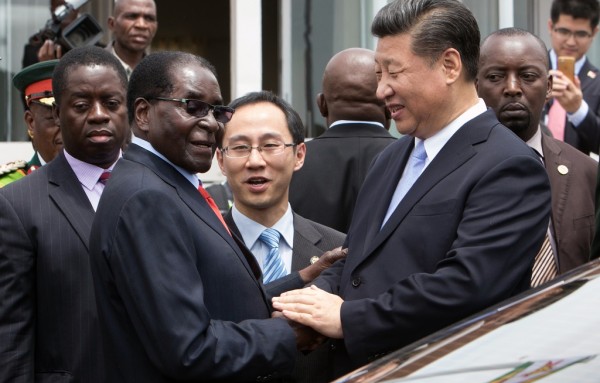 China is paying close attention to the situation in Zimbabwe and hoped for stability and a peaceful,

Source: China will not cut ties with Zimbabwe – ENCA

File: China’s President Xi Jinping (2nd R) shakes hands with Zimbabwe’s President Robert Mugabe (2nd L) as he arrive on December 1, 2015 in Harare. Photo: AFP/Jekesai Njijizana
BEIJING – China said on Thursday its “friendly policy” towards Zimbabwe would not change, after the military said it had seized power and was holding President Robert Mugabe and his family safe while targeting “criminals”.China is paying close attention to the situation in Zimbabwe and hoped for stability and a peaceful, “appropriate” resolution, foreign ministry spokesman Geng Shuang told a daily news briefing in Beijing.

China’s cooperation with Zimbabwe was “all round” and benefited both peoples, he added.

Influential state-run Chinese tabloid the Global Times said in an editorial on Thursday that Zimbabwe was unlikely to reverse its relations with China.

“Since Zimbabwe’s independence, there has been no anti-China faction in the country, and it is unlikely to appear in the future,” it said.

In contrast to his elevated status on the continent, Mugabe is reviled in the West as a despot whose disastrous handling of the economy and willingness to resort to violence to maintain power destroyed one of Africa’s most promising states.

China and Zimbabwe have a close diplomatic and economic relationship and Beijing has stood with Mugabe’s government in the face of Western economic sanctions, investing in auto, diamond, tobacco and power-station projects.

BAIC Motor Corp Ltd, which has a joint venture making pick-up trucks in Zimbabwe, told Reuters there had been no impact on its operations.

Neither of two other Chinese companies – Tianze Tobacco and diamond mining Anjin Investments – responded to requests for comment on their operations in Zimbabwe.

In August, Zimbabwe’s government said a Chinese company planned to invest up to $2-billion (R28.6-billion) to revive operations at Zimbabwe Iron and Steel Company (ZISCO), which ceased production in 2008 at the height of Zimbabwe’s economic meltdown.

That same year, China vetoed a proposed Western-backed UN resolution that would have imposed an arms embargo on Zimbabwe and financial and travel restrictions on Mugabe and 13 other officials, saying it would “complicate”, rather than ease, conflict.