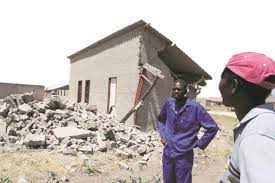 BY TAFADZWA KACHIKO/ TATENDA KUNAKA
CHITUNGWIZA Municipality has started demolishing illegal structures in the dormitory town in an operation that council officials said was meant to bring order.

The exercise began at Huruyadzo Shopping Centre in St Mary’s and Zengeza 5 on Wednesday following concern over the mushrooming of illegal structures in the town.

“We are just targeting those with fake council papers. They might claim to have papers, but their papers are fraudulent. You find that there will be no record in the office,” Machona said.

“We gave them enough notice, issued prohibition and enforcement. We served through the Press, some in person and others just evaded. We used to confiscate their tools. They know that and they have remained adamant.”

“It’s any operation that is taking place for 30 days. We want to deal decisively with this illegal land grab,” he said.

“I urge all the residents to follow proper procedures when purchasing a stand and also during construction.”

But residents associations claimed that some of the victims had the “necessary paperwork”.

Chitungwiza and Manyame Rural Residents Association secretary Brighton Mazhind said: “We are investigating why the council went on to demolish these structures because they all have paperwork. It will cost the ratepayer if the affected owners approach the courts.”

Chitungwiza Residents Trust director Alice Kuveya added: “Why did the council leave them building in the first place? We have engaged our lawyers and they will take
action.”