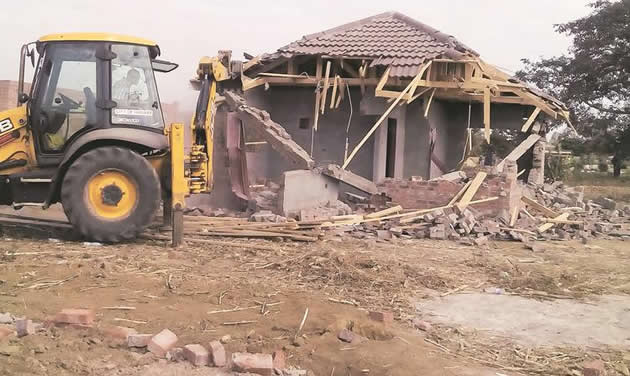 Chitungwiza Resident Trust (Chitrest) yesterday moved in to block Chitungwiza Council from executing random demolition of houses through their lawyers who demanded a report on the regularisation of the stands which they claimed had been done by the affected individuals.

This was after a leaked memorandum dated January 12, 2021 announced that there were plans to demolish over 11 000 illegal structures in the dormitory town, subject to a court order.

Chitungwiza Municipality has over the years threatened to demolish thousands of houses built on spaces reserved for clinics, churches, schools, cemeteries, recreational activities, roads and under high-voltage electricity pylons.

Chitrest, through its lawyers Tinashe Chinopfukutwa and Idirashe Chikomba yesterday wrote to council demanding a list of the stand numbers to be demolished instead of the demolitions being executed as a random exercise.

The lawyers noted that council’s director of works acknowledged the need for council to obtain valid court orders authorising the demolitions.

However, last year the council demolished houses without obtaining a court order.

“In terms of section 74 of the Constitution, Chitungwiza Municipality is enjoined to obtain court orders authorising the demolition of all the houses specified in the Chitungwiza demolition report of 12 January 2020.

“We note that the report which specifies areas to be demolished does not identify the individual stand numbers and properties targeted for demolitions. The demolition report merely makes globular identification of sites to be demolished without identifying the individual stand numbers or properties,” read the letter from Chitrest.

“Our clients also advise us that several residents, whose houses are located in the various sites targeted for demolitions, were invited by the Chitungwiza Municipality to pay regularisation penalties and paid for the purchase of the properties.”

The lawyers argued that the residents duly paid the regularisation penalties and the purchase prices in terms of the offer extended to them by council.

“Should council proceed to demolish the houses in terms of a report of 12 January 2021, then residents, who paid regularisation penalties, risk their houses being unlawfully demolished as the identification of sites targeted for demolitions does not specify which individual property is being targeted for demolition,” they said.

The lawyers said should the demolition report not be revised, they would institute legal proceedings for the same to be set aside.