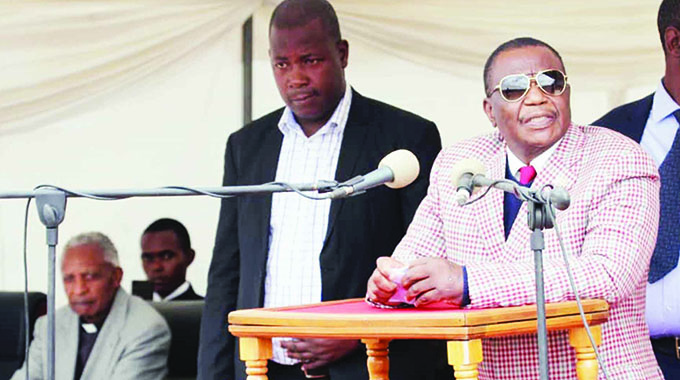 Vice President Constantino Chiwenga addresses congregants during a solidarity prayer meeting at his Wedza homestead yesterday. Seated on the left is Father Emmanuel Ribeiro of the Roman Catholic Church. – Picture by Innocent Makawa

Tendai Mugabe in HWEDZA
The era of fake prophets who hide behind the name of God to attack the national leadership and extort money from the public has ended, Vice-President Constantino Chiwenga has said.

He said people should now unite and work towards a Zimbabwe desired by all citizens.

Vice-President Chiwenga made these remarks while addressing thousands of Christians who came to pray with him at his rural homestead in Hwedza following his discharge from hospital where he was receiving thorough medical attention after he was affected by the White City bombing incident.

The Christian community that came to pray with the VP was led by the Roman Catholic Church.

After the White City bombing incident in June, VP Chiwenga could not receive thorough medical attention at the time as he soldiered on to complete the Zanu-PF campaign trail.

In his usual jovial mood, VP Chiwenga attended a church service and interacted with Zanu-PF members who also came to see him for the first time after his return from South Africa last week before he delivered a speech that lasted more than 30 minutes.

“There are others who are now calling themselves prophets,” said VP Chiwenga. “Aripo uyo anonzi ani, Talent (Muzuva). That should come to an end today. Zvatoperera pano. We don’t have that culture where one moves around attacking leaders under the guise of preaching the word of God. God does not say move around attacking other people.

“We want people to go to church and pray to God. This habit of using the name of the church to extort money is not good. How can you say that on the one hand you are practising Satanism and on the other you say you are a prophet, what kind of a prophecy is that? It’s not good and we don’t want that.

“Tiri kutaura ini madziChiwenga kuno uku. Tiri kutaura padzinza. Vamwewo vakateerera kuti kuno ndokwazviri. Isu tinorova. So that should end and work towards building the Zimbabwe we want. The Zimbabwe we want is the one we explained that it is endowed with vast minerals. God has blessed us with good soil and we should utilise it to develop our country.

VP Chiwenga called for unity of purpose among Zimbabweans.

He said there were some who wanted to exploit the current economic challenges for political ends but they would not succeed.

“We don’t want people to play games with this country. Several people lost their lives to liberate this country. It does not make sense for one person to accumulate wealth while others are suffering. Where will you enjoy that wealth from? What we want is unity to build the Zimbabwe we want.”