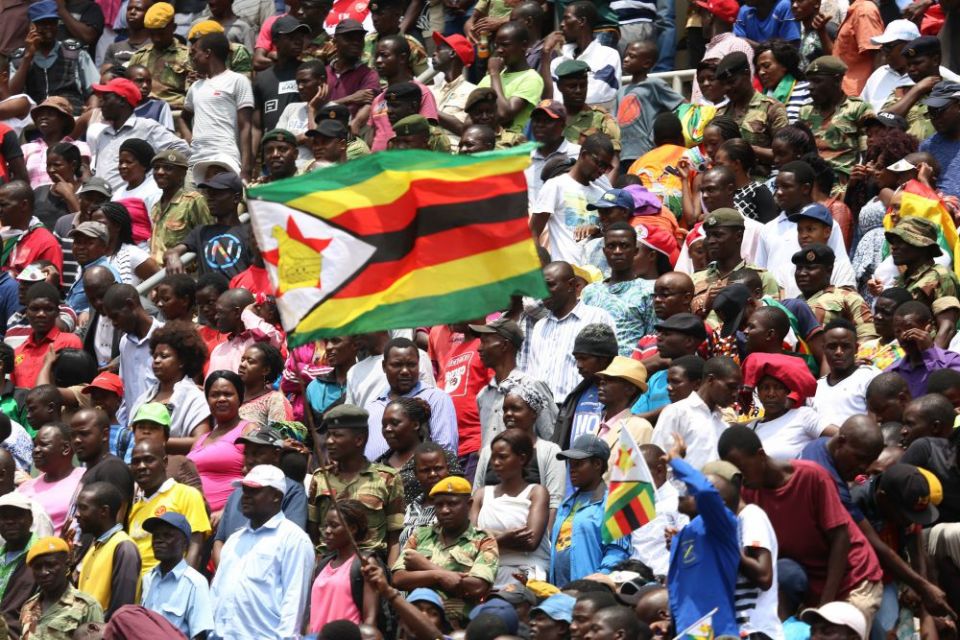 People celebrate with the national flag during the Nov. 24, 2017, swearing-in ceremony of Zimbabwe President Emmerson Mnangagwa in Harare. (CNS/EPA/aaron Ufumeli)

HARARE, ZIMBABWE — Catholic bishops and other church leaders in Zimbabwe want the country’s polls on July 30 to be peaceful and credible as opposition parties battle to force the electoral body to institute reforms while observers call for due procedure to be followed to avoid a disputed election.

Download this FREE NCR eBook to learn more about impact of Humanae Vitae.

President Emmerson Mnangagwa declared July 30 as the date to choose a new leader, house of assembly and local government representatives. The Zimbabwean election comes about six months after the takeover of power by the military and the removal of former leader, Robert Mugabe, under a peaceful settlement brokered by Jesuit Fr. Fidelis Mukonori.

Now Catholic bishops have proffered their voice ahead of a key election that Zimbabwe desperately needs to exorcise negative sentiment around the ouster of Mugabe and elevation of Mnangagwa in November 2017. A credible election will also help Zimbabwe move forward.

“For Zimbabweans, elections have been occasions either of great hope and excitement or of fear and anger ending in disillusionment,” the Zimbabwe Catholic Bishops’ Conference said in a pastoral letter a few weeks before the July 30 election. “It is true that elections are never, in themselves, the answers to problems. But, as part of a wider program of transformation, they can be moments of national recommitment,” it continued.

The Zimbabwean Catholic bishops have also expressed concern over this, saying “the appearance of armed men and vehicles on our streets was alarming” although “the transition to a civilian administration was managed effectively” by the army.

The involvement of the military, especially ahead of the July 30 election is one of the contested issues by the opposition in Zimbabwe, which says soldiers have been deployed to intimidate voters in rural areas to cast their ballots in favor of the ruling Zimbabwe African National Union-Patriotic Front (Zanu PF) party.

Key military officials involved in the November power shift are also now in government, with Mnangagwa appointing former commander of the Zimbabwe Defense Forces, retired Gen. Constantino Chiwenga, as vice president as well as other senior military personnel as ministers.

This has been criticized by the main opposition, Movement for Democratic Change with presidential candidate Nelson Chamisa, who took over from the late opposition leader, Morgan Tsvangirai. The Zimbabwe Democracy Institute, an academic research organization, published a July report that detailed evidence of military deployment of soldiers in rural areas to coerce villagers to vote in favor of Zanu PF.

The military, however, has denied involvement in campaigning for Zanu PF, with Col. Overson Mugwisisaying during a July press conference in Harare that the military was neutral. He also said the military will respect the outcome of the upcoming poll after complaints that military personnel may prevent an opposition leader from taking over even after winning the election.

It is the view of the Zimbabwean Catholic bishops that “the initial and continuing role of the military with the risks to the freedom of our political processes that this might carry for the future” be curbed.

Apart from this, the bishops have joined other church leaders in the country in praying for a peaceful poll and in advocating for the electoral environment to be fair and free. They have also stated that a free and fair electoral framework will ensure that “no individual or small group [will] be able to determine the results” of the election.

“Everything that makes for greater transparency will contribute to the credibility of the election and its result both inside and outside Zimbabwe. The process of casting and counting votes on the day of the election needs to be well-organized, safe and efficient, protecting both the confidentiality of the individual voter and open to the proper scrutiny of authorized observers,” the Catholic bishops said in the pastoral letter, which was signed by Archbishop Robert Ndlovu of Harare.

Bishop Rudolf Nyandoro, chairman of the Catholic Commission for Justice and Peace in Zimbabwe, said during a conference attended by other church leaders from various denominations that some of the sloganeering ahead of the poll removed citizens from their Christian values. Other church leaders agreed, calling for peace-building efforts while various groups have been holding prayers across the country.

“The behaviors and mannerisms we develop in politics especially when we are sloganeering, remove the Christian life and values we purport to have,” Nyandoro said. “We have liked politics more than we have liked God. In our political sloganeering, we have wished our political opponents dead. Literally, it would also mean wishing God dead since everybody was created in his image.”

“Candidate names will still retain the alphabetical order of surnames. Issues to do with design and printing of ballot paper remain exclusive prorogation of ZEC. Presidential ballot printing has been completed. More than 50% of national assembly ballot printing now completed,” said ZEC chairperson Priscilla Chigumba in response on July 13.

Opposition leaders believe that the poll will be manipulated and are demanding that the printing process be restarted. They also want the Zimbabwe Electoral Commission to avail to them a voters’ roll that has pictures of registered voters. During a protest they threatened to camp at the offices of the electoral body until their demands are met.

Chamisa will compete for the presidential poll against incumbent Mnangagwa and 21 other candidates, including former Zimbabwe vice president Joice Mujuru. Mugabe’s name has also been thrown around by the National Patriotic Front party mainly comprised of ousted allies of the former leader while his wife, Grace Mugabe, has been rumored to be working with Chamisa.

If there is no outright winner in the July 30 presidential election, Zimbabweans will vote again on Sept. 8 in an election run-off. Some officials also say a government of national unity could be in the cards after the election in a bid to stabilize Zimbabwe’s economy, which is battling foreign exchange market and cash shortages, and the bishops’ conference is not leaving out a coalition government as a possibility.

“It is quite possible that the results of this election may give no individual leader or party an outright or clear majority,” the bishops said in their pastoral letter. “It would invite us to a new and challenging kind of politics, a new cooperation and harmony based on reasoned argument, generous compromise and respectful toleration.”