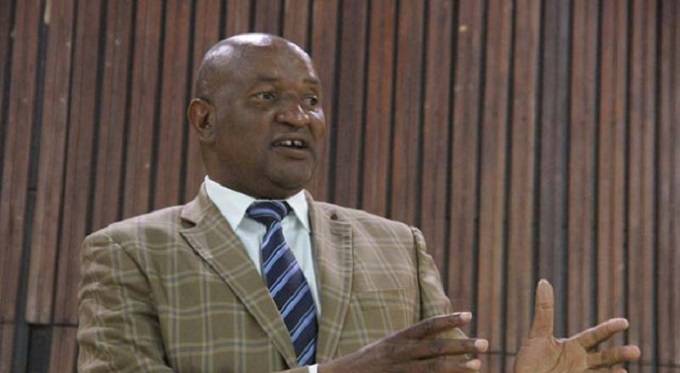 THE push for talks between President Emmerson Mnangagwa and the opposition has suffered a significant setback after Zanu PF accused the church yesterday of acting in bad faith over the mooted national dialogue.

Speaking to the Daily News yesterday, Zanu PF secretary for security in the politburo, Lovemore Matuke, pictured, said the Zimbabwe Council of Churches (ZCC), in particular, was allegedly working against the ruling party.

The ZCC executive is led by secretary-general Kenneth Mtata, who has been at the heart of initiatives to foster national dialogue involving Mnangagwa, the opposition and other key stakeholders.

This comes as many Zimbabweans have been yearning for Mnangagwa, opposition leaders Douglas Mwonzora and Nelson Chamisa to bury their political hatchet and hold talks to help extricate the country from its myriad challenges.

It also comes after the church recently presented the trio with a draft national talks framework.

“What the ZCC is doing … is not what a church does. We have gathered intelligence as the Zanu PF security department that it’s being driven and funded by people who are pursuing a regime change agenda in the name of national dialogue.

“We now know they are speaking in forked tongues because they are working hand in glove with some non-governmental organisations, students and teachers’ unions such as Artuz (Amalgamated Rural Teachers Union of Zimbabwe) and some so-called human rights groups in and outside the country.

“We are carrying out investigations as a party as we seek to establish the substance of what they are doing. We insist that clerics must confine themselves to the pulpit and not delve into politics,” Matuke told the Daily News.

He also claimed that the Zanu PF security department had it on good authority that the ZCC and some NGOs had recently met to discuss funding for the regime change project.

The meeting, he added, had allegedly been organised by a United States organisation, the National Democratic Institute (NDI).

“Some of the regime change organisations they are working with include the National Democratic Institute which held a meeting with them at the beginning of the year, around January 20-22,” Matuke said.

The NDI is described as an NGO that works to promote openness and accountability in government by building political and civic organisations, safeguarding elections and promoting citizen participation.

Repeated efforts by the Daily News over the past three days to get a comment from Mtata and the ZCC have so far not yielded results.

“There is no leader, let alone in Zanu PF who declined dialogue … What is objectionable are two basic things, to distribute dialogue on a preferential basis and … to engage in dialogue which is prompted by foreign interests.

“These issues don’t need foreigners. We are seeing church leaders who are going to the EU and Americans.

“If they want funding to run their churches, that’s entirely a different matter which should never be confused with Zimbabwe’s quest for national dialogue, which is a national initiative and which is an expression of national sovereignty,” Charamba told the Daily News’s sister paper, the Daily News On Sunday.

The country’s top clerics, converging under the banner of the Zimbabwe Heads of Christian Denominations (ZHOCD), have been going full steam to foster talks between Mnangagwa and his political rivals.

The clerics have already shared their draft proposal for national talks with Zanu PF, the MDC and the MDC Alliance.

The ZHOCD is made up of the Zimbabwe Council of Churches, Zimbabwe Catholic Bishops Conference, the Evangelical Fellowship of Zimbabwe and the Union of the Development of Apostolic Churches in Zimbabwe — these bodies are believed to represent about 80 percent of the country’s Christians.

“The proposal is being shared with the diplomatic community, the business sector and civil society for their consideration because this is a conversation that the whole nation must have consideration regarding how we find consensus and lasting solutions to the challenges we are facing,” ZHOCD secretary-general, Mtata, told the Daily News last month.

This comes as Mwonzora and Chamisa are stepping up the chase for talks with Mnangagwa and other key stakeholders, to help end the country’s decades-long political and economic crises.

It also comes as the opposition has started nationwide consultations with Zimbabweans on the mooted talks.

Last week, Chamisa twice reiterated his desire to hold dialogue with Mnangagwa and other key stakeholders in the interest of the country.

Speaking in Harare at a meeting organised by Crisis in Zimbabwe Coalition, Chamisa revealed that he had written several letters and also sent emissaries to Mnangagwa about this — to no avail thus far.

At the same time, he also reiterated his call for a broad coalition of opposition parties and other key stakeholders to push for reforms and national dialogue.

“The waiting is over. We have said that it is now time to act and the platform (dialogue) is not supposed to be partisan. It is not an MDC affair, it is a citizen affair and that is the clear instruction and signal to the people of Zimbabwe.

“Let’s take up the challenge. Join us. Let’s do something and let’s work on it. The issue of convention is important for us to be able to come together through dialogue,” Chamisa said.

“We can’t converge on the solution if we are not converging on the understanding of what the problem is.

“Zanu PF would say it’s sanctions. We would say it’s governance. And for us to be able to come together, we must sit down and say what is the problem we are facing.

“And the mistake our colleagues in Zanu PF are making … is to think that they are the beginning and the end of the definition of what Zimbabwe is,” Chamisa added.

In the meantime, political analysts such as renowned professor of World Politics at the University of London’s School of Oriental and African Studies, Stephen Chan, have said dialogue is the best way to end Zimbabwe’s challenges.

“The situation in Zimbabwe is dire, so that posturing is simply futile. I think everyone is slowly coming to the realisation that dialogue is unavoidable.

“Certainly, the view in the international community is that talks that are unconditional — on all sides — open and transparent, should take place.

“Inclusive means inclusive. The MDC has split. It cannot at this moment be repaired. Both factions need to have a place at the talks,” the respected Chan told the Daily News recently.

“No power to help Zimbabwe exists on any side, except through careful and detailed expert planning that is also negotiable with the donor community and lending agencies of the outside world.

“The economy is front, back and centre of all of Zimbabwe’s problems. Closely linked to that is, of course, the dire problem of corruption.

“And I have often suggested the Kariba Houseboat model. The principal players should simply go off to Kariba, take a houseboat out into the lake and stay there for an entire weekend once every month — finding, via informal means, common ground.

“No one should take credit for any successful plans. There should just be agreement on how best to go forward,” Chan further told the Daily News.